George Westinghouse Jr. was one of the top innovators of his time, first as an inventor himself, and later guiding other inventors and the direction of Westinghouse Electric Company. Later in his life he dropped the "Jr" and is known today simply as "George Westinghouse".

George Westinghouse Jr. (today known as George Westinghouse) was born into a family of industry. His father George Sr. operated a small company producing farm machinery.  The family moved several times as fire destroyed the family business and more than once his father had to start all over again. After a fire burnt down their workshop in Central Bridge New York (Esperance, Schoharie County) they moved to Schenectady, New York.  Here his father established a successful factory along the Erie Canal on Dock Street. 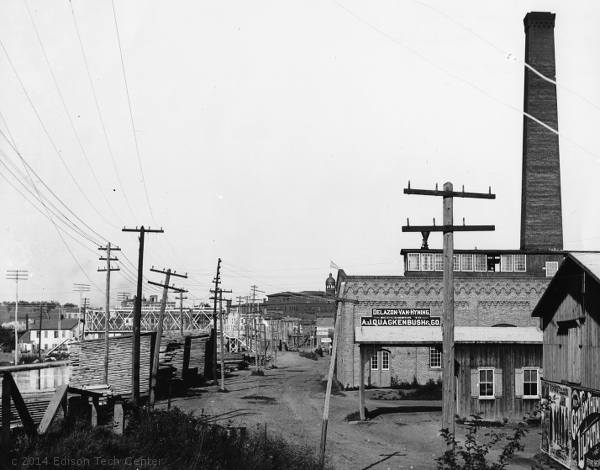 Young George often skipped school and tinkered at his father's factory.  He was surrounded by some of the country's best craftsmen as Schenectady housed the Schenectady Locomotive Works as well as Westinghouse's growing factory.
He joined the armed services in 1863 and later became Third Assistant Engineer on the USS Muscoota. He returned to Schenectady in 1865 and went to Union College.  He dropped out of school in the first semester and proceeded to work on inventions.

George developed his first major invention, the rotary steam engine. This was based on the concept that a steam engine channeling steam pressure through a spinning axis was more efficient than the reciprocating steam engines of the time. His invention is related to the steam turbine which came along later in the 1880s.
He went on to make a number of other inventions, although he found it very difficult to sell his inventions to companies, even after successful demonstrations.
He was married in 1867 to Marguerite Erskine Walker and moved to Pittsburgh where he believed he would find more companies open to funding his inventions and development processes.


1869 proved to be a landmark year for George, he invented a railroad braking system which revolutionized rail safety.  While on the third floor of the Furman Block on State Street in Schenectady he reflected on a horrible train wreck he had witnessed while riding on the Mohawk and Hudson Railroad, and he came upon a solution to how to get a train to stop quickly.  Previously trains were stopped by people (usually impoverished boys) hired to stay on top of train cars turning mechanical break wheels.  This slowed trains very gradually and resulted in many boys being crushed between rail cars as the job was extremely dangerous with low pay. George's invention worked with compressed air which released brakes off the wheels, if air pressure was lowered, or accidentally leaked, the brakes would activate. This system is the root of modern rail braking systems and related to brakes for large trucks.


By the early 1880s Edison's DC systems had just dazzled the world, however in Europe AC power was in it's infancy and it began to capture the attention of American electrical engineers. While Edison, Brush, Sprague and Thomson had a stranglehold on DC systems, Westinghouse sensed opportunity with alternating current.

Westinghouse bought into the AC world by buying patent rights to the Gaulard and Gibbs transformer.  He hired William Stanley and lawyer Franklin Pope to develop a more useful and reliable transformer. Simultaneously other companies in North America like Thomson-Houston in Lynn, MA also bought AC apparatus from Europe to try to develop their own systems.  Westinghouse funded Stanley's experiments in Great Barrington in 1886.  The results shocked the world as Stanley created the first reliable transformer and demonstrated lighting the downtown. George Westinghouse came up to see the system personally and was pleased.

Westinghouse hired Oliver Shallenberger to develop the induction meter which allowed them to measure AC power. Coming up with the meter was very important as it allowed a way to measure power and therefore make AC systems profitable.


Westinghouse was able to buy AC patents developed in Europe and nationally and was able to attract talent.  Edison fired many great engineers for talking about AC development, people like CS Bradley who developed the first 3-phase generator. While Edison tried to market DC the AC scene was creeping up all over the world.  The end of the War of Currents was at the International Electrotechnical Exposition in Frankfurt Germany in 1891.  This event and demonstration of AC power proved to be the definitive moment.  After this JP Morgan swooped in and consolidated many of Edison's companies along with his competitors like Thomson-Houston and Brush to form General Electric.  General Electric proved to be a formidable competitor against Westinghouse since it had many of it's own AC experts and was actively recruiting young electrical engineers from Europe.  Westinghouse hired Benjamin G. Lamme in 1889 and soon he lead AC power development at the company.

The two known ways to produce electric power in the early years were hydro power and reciprocating steam engines
Westinghouse knew that reciprocating steam engines were inherently inefficient when he was still a teenager. Finally in 1884 Charles A. Parsons developed a practical steam turbine. Westinghouse was quick to buy up rights to the turbine and start developing it further. By 1898 he had a 300 kW steam turbine powering part of his air brake factory.

George Westinghouse stepped down from control of the company in 1907.  His health quickly declined and he died in 1914 in New York City.

The Westinghouse Company lived on until the 1980s and 90s when many divisions of the company were sold off and the company shifted into media (CBS Corporation). The company lives on in name, and it's nuclear division remains, however the bulk of the company and its manufacturing line is now closed.