When you think of how difficult a task it was trying to measure something which you cannot see, cannot taste, cannot grasp and cannot hear, you will realize how great of an accomplishment it was for engineers like Oliver Shallenberger at Westinghouse to invent the watt-hour electric meter.

Since 1888 many other kinds of useful meters have been developed. When the average person thinks of a great invention, they think of the lightbulb or television. However they don't realize that without good measuring devices almost none of our modern inventions could exist!


In this page we tell just a bit about meters and provide you links to some more technical explanations. If you ask Robert N. Hall the inventor of the semiconductor laser (used everywhere in the world today) what his greatest invention was, he will tell you it was the lithium drift detector. From someone who really understands technology that tells you a lot about the importance of the tools we use to measure.


1.) Types of Meters
2.) Timeline of the History of the Amp/Voltmeter
3.) Innovators of Meters

There are more types of meters, detectors, and measurement devices than could be possibly listed here, but we will list a few of the most prominent which have really changed our world. 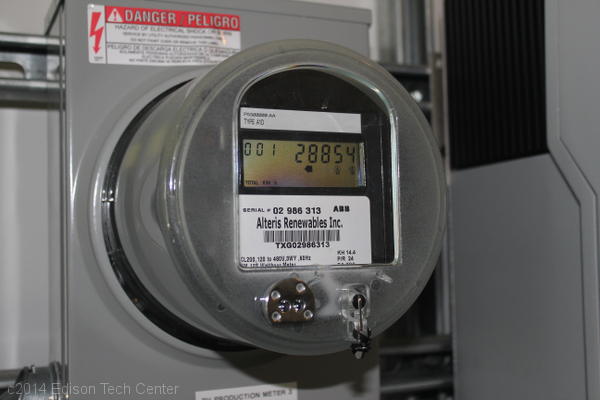 Watt-hour Meter - This is one of the most important meters ever invented. This measures the amount of AC current used by a customer. With an accurate way to measure power devised in 1888, this helped make the electrical grid economical and in the 1890s the electrical industry flourished. On the business side of things it was necessary to measure use as it makes for a fair way to charge customers. The traditional watt-hour meter uses a disk that spins due to electromagnetic fields. A counter measures the number of rotations. The more energy one uses, the faster the disk spins. 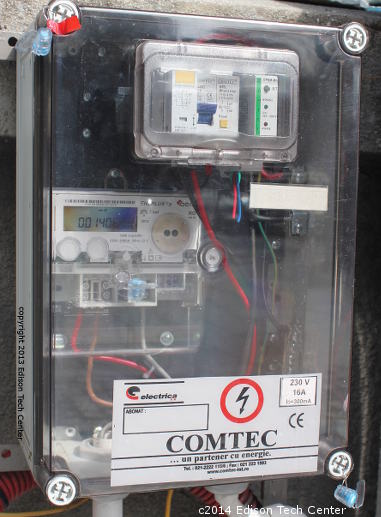 Galvanometer - detects electric current
This was historically the name given to an 'ammeter', it works by using coils of wire on a base of a needle in between two permanent magnets. This is one type of "moving coil meter".

Ammeter - measures electric current (amperes)
There are many types of ammeters today.  Digital ammeters use a shunt resistor with volt meter and compute formulas to display the value.

Voltmeters
Oscilloscopes - displays the wave form of a variable voltage signal
The oscilloscope is extremely useful as it can show you the waveform of the circuit you are working with. You can take a repetitive signal and display as a static line graphed on a screen, this can allow a human to see a pattern that was previously unobservable due to its passing at high speed.


Above: A perfect AC signal can be shown in a graphic wave on an oscilloscope. Changing loads and issues in a transmission system will distort the waveform. Looking at the waveform can tell you a lot about what is happening and where corrections need to be made. Today computers monitor the waveform in power grids and quickly send commands to change settings to correct the waveform. This is just one of 10,000 uses of an oscilloscope.

Scopes are used monitor wave forms, different wave forms are useful for doing different jobs in circuits.  Without the oscilloscope most modern technologies would never have been able to be developed. 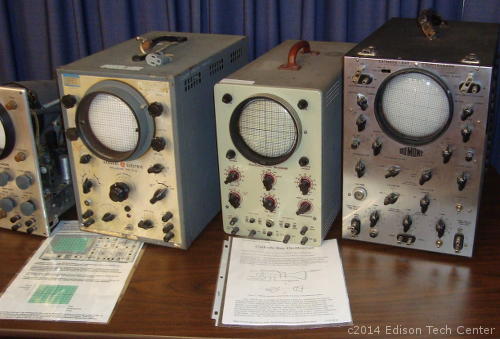 Above: oscilloscopes from different eras at the Edison Tech Center

Voltage Regulators - these are basically devices that keep track of voltage (the meter part) while using a transformer to control the power coming through it. You will see these all over the world typically as large can-like devices on power poles and substations. Many people mistake these to be transformers.

These devices have rotating coils, which can increase the inductance on a line or reduce it. A control panel allows utility workers to specify a range that the regulator will operate at. These devices work as changing power loads cause changes in voltage and the AC waveform. If there is a sudden spike (like from lightning) there are other devices which work faster. Newer voltage regulators have computers which send data back to headquarters and are part of what we call "the smart grid". Older voltage regulators had a meter with a needle that would mark the highest voltage that had passed through so that line workers could visit the location and see how high things had gotten in the last x number of hours or days.

Below: typical voltage regulators in a substation 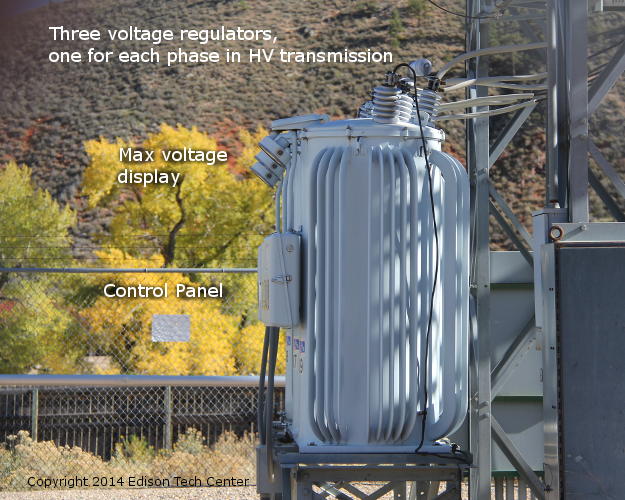 Other types of meters:

There are now countless types of meters to measure all types of specialized parameters for all kinds of tasks in all fields from nuclear power to the field of radio. Great engineers like Ernst Alexanderson, Irving Langmuir, Albert Hull and others often had to invent new metering devices as a necessity to development of the project at hand. 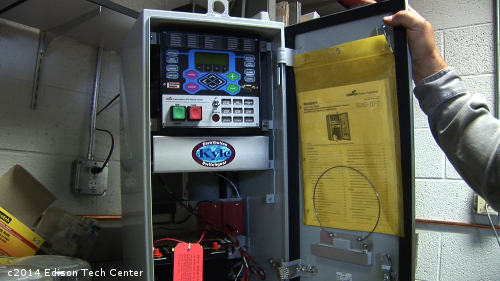 Above: Current Transformer, this "CT" outputs a proportion of the power going through the line as low voltage which can be used to drive a meter. This CT is used to monitor the power use of a major power user (a mine in Telluride, CO).

2.) Timeline of the History of Electric Meters:

Here is a short list of important events in the history by the Edison Tech Center.

1800 The electric age begins with Volta's battery which sparks many inventors and scientists around the world to start to experiment with electricity. There are no standards of measurement or meters to measure this force. No one yet understands what electricity is and therefore it takes another 90 years before more scientific explanations help to break down electricity into its elements which then are assigned standards by the IEC in Chicago and Paris in the 1880s-1890s.

1879 Thomas Edison desperately needs a way to measure the electricity his customers would use. He developed a chemical meter with two rods of copper in a solution, as power was used one of the electrodes dissolved, showing by mass how much power had been used. This invention was not ready for use when the Pearl Street Station started working with customers, so early customers got electricity for free. After a year Edison started using the chemical meter but it was not accurate and customers were unhappy.

Interesting Fact: JP Morgan ran 106 lamps from 3pm-6am but never paid more for this use since he only paid by the number of light sockets and for the physical bulb purchases.

1880s Elihu Thomson develops a chemical meter similar to Edison's except it used zinc sulphate bath which worked much better. Edison's companies immediately started using Thomson's meter as they were desperate to solve the problem of metering.

1880s Thomson builds one of the first reliable wattmeters. He used solid silver bars and brushes with an aluminum disk with a small motor. Once again everyone including Edison used Thomson's meter as a standard.

1880s Edison vs. the gas industry: Thomas Edison adopted Thomson's meters and changed to a model that charged customers for electricity use, however this angered many customers who had been convinced to change over from gas lamps because of the fact that the flow of electricity was free. Edison doesn't get enough credit for his taking the brunt of the gas vs. electricity battle. We have to thank Edison for hanging in there and operating at a loss for years before getting profit.

1886 Edward Weston develops a moving coil galvanometer type meter with stable permanent magnet which becomes the basis of Amp, Volt and Watt meters for the next 100+ years.

1888 Oliver Shallenberger at Westinghouse develops a meter that is close to the modern watt hour meter and sets the new standard.

1890 Only 5% of US homes were equipped with electricity. Arc lamps for public street lighting and trolleys were the most profitable employment of the technology. The AC revolution of the 1890s would change that.

1890s Elihu Thomson continues to improve electric meters. Thomson has been working with AC power since the 1870s and has more experience in the area than most people around at the time.

1896 William Stanley develops a static ground detection meter. This method is still used today to help ground vehicles and facilities as a measure of safety.

This timeline was created by the Edison Tech Center, report copyright infringement by content strippers who target timelines like this.

1916 High Voltage Measurement: Chubb and others develop meters that use predecessors to vacuum tubes and make the first somewhat accurate ways to measure this dangerous and difficult form of power. Before this point they used the crude method of measuring the distance an electric arc could travel through air or a tube to figure out the high voltage.

1970s Vacuum tube meters finally kill off moving coil galvanometers which were still in use by large companies. Many employees take the older meters home and these enter collections including the Edison Tech Center's collection later on.

2000s Digital multimeters are produced by many companies, some reach prices as low as 90 cents per meter while others made by Fluke or Milwaukee have a higher standard of quality and reliability and fetch prices in the hundreds of dollars.

3.) Major innovators of the electric meter: