There are many kinds of lasers and a million applications of them, here are some of the basics.

A lasers emits one color of light in a concentrated beam. The device uses light oscillation to create the beam.  A full understanding of lasers requires an understanding of quantum physics and mechanics.

A laser is created by having a device with a medium that allows the light to absorb more energy as it passes through it, thus 'amplifying' the light.  Two mirrors on each side of the device bounce light back and forth (oscillation), so as the light bounces back and forth in the medium, it gathers strength from the medium.  One of the mirrors is slightly translucent and allows the beam to escape.

This energizing of a beam can be done with all kinds of 'light' energy, including microwave (maser) and non-visible ultraviolet wavelengths.


See the video below where Bob Hall, the inventor of the Semiconductor laser explains how it works:


The medium in the video above is the solid semiconductor Gallium Arsenide, when it is supplied with electric charge the atoms in the GaAs get excited. The atoms emit a photo in the same direction as the passing light.  In other kinds of lasers a gas or liquid may be used instead of the block of semiconductor (GaAs).

Lasers can be pulsed or continuously operated (CW). Pulsing lasers can allow one to have power build up and thus make a more powerful blast.  Lasers can be built to operate at different frequencies for specific uses.


The laser came from initial work on amplified microwave beams at Bell Labs.  During the 1950s microwave technology was being developed across the world.  The most notable researchers were C.H. Townes, Nicolay Basov and Alexandr Prokhorov.

Gordon Gould envisioned the laser in 1957 and published the term 'laser' in a 1959 conference and filed for a patent. Charles H. Townes and Arthur L. Schawlow at Bell Labs also had been working on the idea with ultraviolet wavelengths.  After a long legal battle Gould finally won patent rights in 1987.  Gould is considered the inventor of the first gas discharge laser which is used in 80 percent of industrial, commercial and medical applications. An example of which is the carbon dioxide laser which is very  powerful and used for cutting steel.

Lasers now can be made from many types of gases: helium-neon, argon-ion, carbon dioxide, neon-copper, and helium silver are just some of the types of gas discharge lasers. 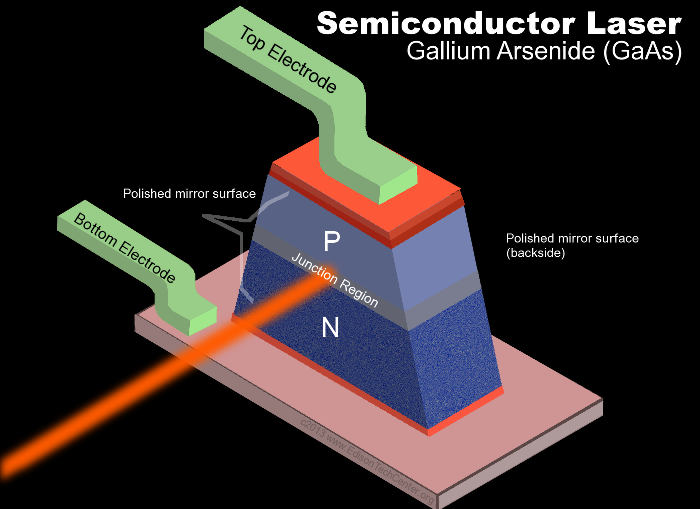 Semiconductor lasers have the advantage of being very small, cheap to produce and the don't require a lot of power.  This laser came from work on diodes in the early 1960s.  Robert N. Hall worked at the General Electric Research Lab and was working on purifying germanium for diodes.  He was encouraged by the work on p/n junctions at Bell Labs at the time and GE was interested in producing power rectifiers and early semiconductor devices.  In 1962 a visitor to the lab suggested he try to build a 'semiconductor laser'. He looked into the new field of lasers and properties of Gallium Arsenide. Very quickly Robert and his team worked out a solution and by November they had the first semiconductor laser. IBM was very close behind but didn't make it fast enough.

Laser diodes are the most common type of laser in the world. They are used from everything from bar code scanners to optical disk drives to medicine.  There are now several kinds of semiconductor lasers. Learn more: wikipedia laser diodes >

This type of laser uses chemical reactions to dump large amounts of energy into the laser, producing very powerful lasers.  These are not common but used in some industrial applications. More >

Most people may know excimer lasers from their use in LASIK eye surgery.  These lasers emit an ultraviolet light and use a gas with excimer medium. More >

These are built at nano-scale, they are the world's smallest lasers and are still in development. More on photonic crystals >

There are many ways to produce lasers and the field of lasers is quite large and an exciting choice for young engineers. Learn more about all forms of lasers here.