The Foundation of Modern Electronics

What is a Semiconductor?
Semiconductor materials are materials with that allow electricity to pass through due to electron flow. In contrast, normal conductors have ionic conductivity. Various elements are semiconductors. One of the first to be experimented with was germanium (Ge) (Element # 32). Silicon and Gallium are more well known semiconductors today.

Semiconductors are so universal in application due to the ability of humans to precisely control how these materials conduct electricity: by controlling crystal size of the element and doping one can achieve desired resistively.
Doping is introducing certain impurities into a pure sample of semiconductor to achieve desired properties. Doping a semiconductor to high levels makes the material act more like a conductor, this is called degenerate. A lightly doped semiconductor is called extrinsic. There are many methods of doping materials and it is a highly complex area of study.

To understand p-n junctions and semiconductors better you will need to invest a good amount of time in a lecture, it is not a simple phenomena and far too lengthy to cover here. See a 59 minute introduction lecture to solid state (semiconductors) from ITT Madras here.

The Future:
Semiconductors are the basis of consumer electronics today and will continue to be vital long into the future. Technologies which will replace many semiconductor electronics will be carbon nanotube based electronics and artificial diamonds. The military and NASA use diamonds instead of silicon wafers because they are less prone to damage by harmful rays in space. Solid state technology used in our power grid and electronics is prone to damage during solar flare events or other electromagnetic pulse events.

(control and manipulation of power to do a given job):

Thyristors - a family of semiconductor devices used to do many jobs. It is used in HVDC power transmission and contains at least 4 layers of n and p-type semiconductor layers (PNPN device). SCRs, Diacs and Triacs are forms of thyristors.

Rectification - allowing current in only one direction. Diodes and Thyristors are rectifiers.

The SCR is either 'on' or 'off'. When a current is applied on one end it rises, when it reaches a given value it is allowed to pass through the device. When the current drops below "holding current" the SCR completely blocks the current. When the current reverses the SCR blocks that as well.

You can see that by controlling the value of when current is blocked, the wave form is chopped. By allowing less current to pass you can reduce the amount of power going to an electric motor, slowing it down. Another thing you can do is convert AC to DC power such as at the interface where AC power meets an HVDC transmission line.

This was an improvement in that mechanical or mercury arc switches result in an arc being formed as the two conductors physically approach. This arc would send a dangerous voltage spike which could damage sensitive electronics. Another improvement is that the SCR stops current from "leaking" through when it is in the off state. This device was one of the most important early developments in electronics. First built by Bob Hall at GE, based on rudimentary work of PNPN devices at Bell Labs.

There are several kinds of diacs. The power diac is called a sidac in Japan and was first used in the first lamp dimmers sold to consumers in the US. That diac was built by Hutson of Texas. This diac dimmer was later replaced by the SCR.

The other signal diode, called diac, is a low voltage device used primarily to gate SCRs and triacs but is not capable of carrying any particular power.

There are other diacs formally known as quadracs (a diac-triac combination) and alternistors. Today the devices are now available up to 3000 amps and 10k volts with at least 25 different structures.


2.b) Other Uses: Diodes and Transistors:

More Applications and Devices:
There are too many applications of the material to list, however you can click on the following links to see related pages and videos on the Edison Tech Center web site.


Learn about the many materials on the Periodic Table which are semiconductors:


Below video: basics of making integrated circuits on silicon wafers (part of our Copper in our Electrical World Series). 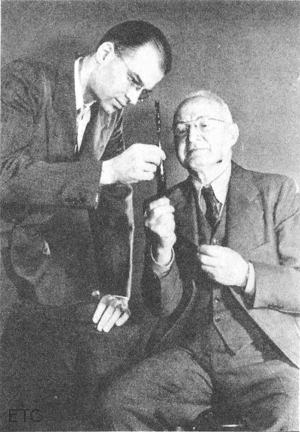 1957 - Gordon Hall and Frank W. (Bill) Gutzwiller develop the SCR (silicon controlled rectifier) at General Electric. Gutzwiller drew the idea on paper while Hall built it and according to some deserves the credit. Gordon Hall at the Clyde facility of the Semiconductor Products Department was challenged by his manager Ray York to see if he could an SCR which had only been theorized at that point. He was successful however Bob Mooney (patent attorney) felt that defending the application would cost so much that it would not be something that the SPD could afford to do.

Please note that many people helped develop this technology at Bell Labs and General Electric. Nick Holonyak and Dick Aldrich left Bell Labs and were sent to the Advanced Semiconductor Lab at GE Syracuse under the direction of Harris Sullivan. As with the MRI and other technologies there has been much controversy over who invented the device. "Bill [Gutzwiller] was manager of Application Engineering and had suggested that it would be wonderful to have a rectifier with a control electrode. But such suggestions do not constitute invention, nor reduction to practice."


1958 - Texas Instruments makes the first real "integrated circuit" consisting of one piece of semiconductor material with multiple components inside it.

More names will be added over time here

Featured videos on the history of semiconductors: