Lightning has the ability to destroy a multi-million dollar transformer or take out millions of tiny devices in homes across the grid. Electrical engineers have spent over 130 years devising ways to control lightning and power surges in the electrical distribution grid. Learn some basics on this page about the interesting devices used to control nature's wildest side.

Insulation is the weak point in a power system and is subject to break down when exposed to extremely high voltages caused by lightning, faults or reenergization of a line. Since the beginning of the electric grid direct lightning strikes and indirect atmospheric effects of it have been a challenge. We use different devices to deal with different problems caused by lightning. 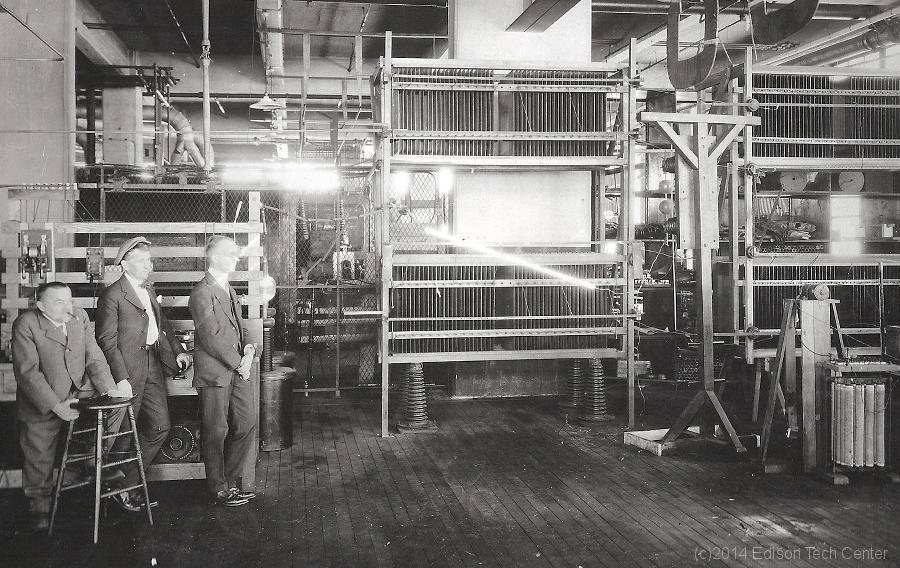 Above: Charles Steinmetz in his lightning lab. He was one of the first to create "artificial lightning" for use in testing utility systems. Later on Pittsfield, MA became one of the most important testing grounds for lightning research in regards to power grid design.

In a thunderstorm negatively charged leaders descend from the cloud looking for the strongest accumulation of ground charge in the area. The leaders move 50 meters down at a time, then stop and readjust direction towards ground potential.

As the lightning reaches within 150 meters of the ground streamers reach upward (+) . The streamer with the strongest charge attracts the leader, it connects and that is where the lightning strikes. The other streamers retract and dump their energy back into the object they came from.

All objects on the ground carry (+) charge up and dissipate it into the atmosphere. Points like the top of a transmission tower or antenna carry (+) charge up and the sharp points have difficulty dissipating the charge, so the positive charge just builds up at the tips of metal ends. This makes this spot likely to for a strong streamer. 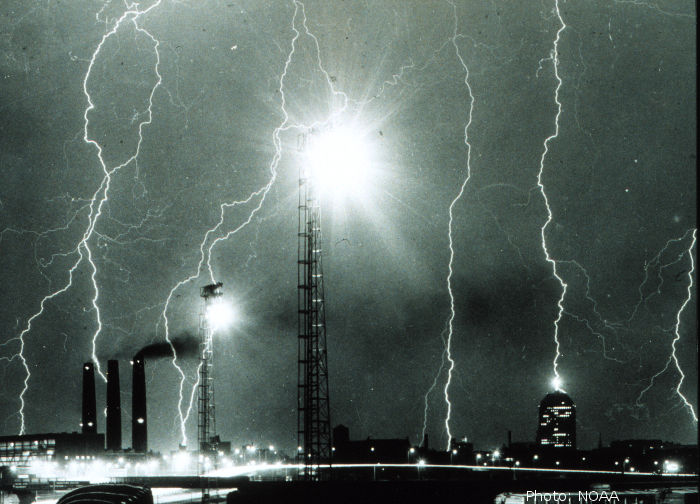 A "switching surge" waveform is much longer; it rises to its peak in roughly 200 microseconds and decays to half value in a few thousand microseconds.

Why aren't fuses enough to stop lightning?
A fuse is a 'simple' type of interrupter. A fuse destroys itself (melts), severing the electrical connection when it receives sustained current or voltage above a certain level. The fuse acts as a resistor and generates heat used to melt the element. The speed at which a fuse melts is very important as it can let some damaging voltage through if it is not fast enough. The voltage rating in a fuse is important as a very high voltage (like from lightning) can arc across the fuse which may have already been blown. Thus the fuse becomes useless at stopping surges from direct lightning strikes. Fuses are also very slow compared with Metal Oxide Varistors and other devices mentioned here. In homes, breakers have replaced fuses. Learn about breakers lower down on this page. 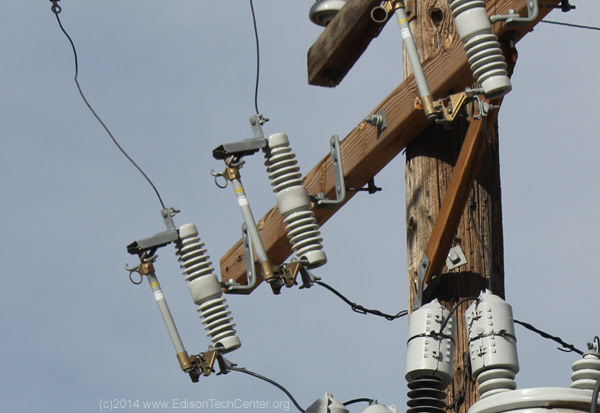 Above: line fuses used on common powerlines. See a video of a fuse blowing here.

Pad-mounted fused switches are used in the power grid. They are low cost, but are 'dumb' as they cannot provide data about the surge. Fuses also require a crew to go out to the substation and replace them after they have blown. This can cause 30 minutes or more of disruption of power service to the area. See this short video from ABB which shows how the fuse is replaced. 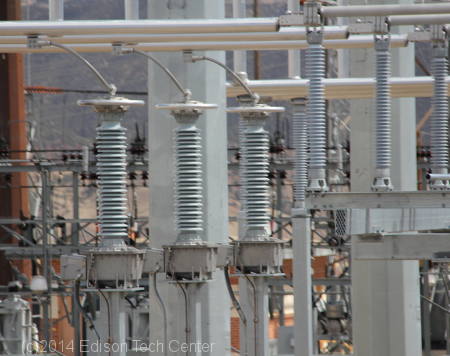 Lightning Arrester - a device on an electric power or telecommunication system which diverts power to ground when the system takes sees an extreme voltage spike. These devices are designed to work with a direct lightning strike, or an extreme surge from an fault somewhere down the line. The lightning arrester is essentially an automatic switch designed to work instantaneously.

Below Left: lightning arrester on display at Edison Tech Center. Below Right: Arresters at Poughkeepsie, NY

Station and line-type arresters can be built into units. Units can be stacked in series to create an arrester with a higher rating.

When lightning strikes close to a powerline it induces a surge in the lines due to the electromagnetic pulse (EMP). EMPs are also called "transient electromagnetic disturbances". Surge arresters are designed to prevent surges caused by a "lightning flash" EMP or other transients from affecting large areas of the grid.  They do not protect against a direct strike on your line, this device stops surges which have a slower rise than direct strikes, which have a rapid rise in voltage. Electromagnetic Compatibility Engineers specialize in understanding the phenomena and damage caused by EMPs.

The surge arrester became very important as consumer devices with semiconductors proved to be very sensitive to mild surges. Prior to the 1960s mild surges had always existed in the web but there was not the need to have as precise control of them. Most consumer electronics have some type of Zinc Metal Oxide surge protector. See how they work in our video here.

Above: "station surge arresters" and large lightning arresters in a substation. Notice the long shield wires hanging above the substation to catch the direct lightning strikes.

It took over 40 years to develop the ideal gapless surge arrestor. Ohio Brass (Hubbell Incorporated) is now the leading manufacturer of station class surge arrestors. They purchased their patents from the General Electric Pittsfield operation.

Air Terminal - a piece of metal either vertical (rod) or horizontal (shield wire) which connects with a lightning bolt and channels the energy to the ground. It diverts the bolt away from more sensitive items like powerlines, antennas, or a flammable structure like a wood barn. Shield wires are visible around substations and radio antennas as long grounded cables. On regular neighborhood service powerlines you may see a catenary at the top of the pole on the highest point, and the three power lines will be on the cross bar just below it.

When a circuit must be disconnected for maintenance you can use a breaker, however high voltage presents a large problem. When you pull two electrodes away from each other an arc will develop. The arc causes ionization of the air and electricity still wants to flow. 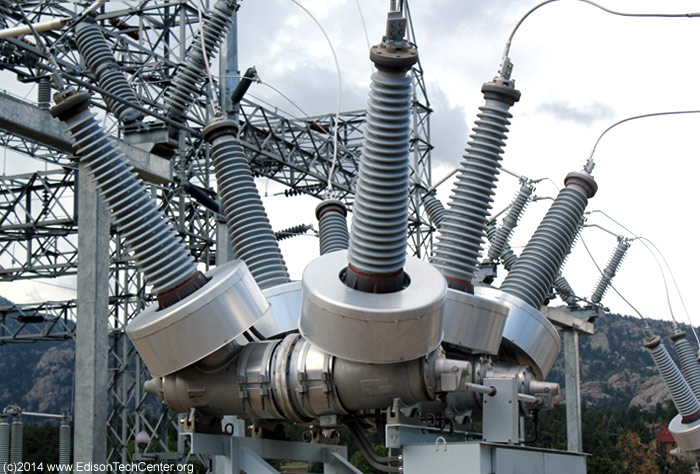 As we move the two conductors apart we use an high pressure air or gas blast to push the arc away and disrupt it. This is basically 'blowing' arc out. In the photo above the strong metal chamber at the base is the pressurized area.

These breakers can be controlled by microprocessor relays or operated manually by a crew and use a container with a vacuum to prevent and arc from forming.

This type of digital breaker can be reset remotely by computer. They can be reset quickly in about 10 minutes. These keep a full record of outages and can replace the 'dumb' fuse which gives no such data. This higher cost option is a component of smart grid technology.


A curve - short fast curve, when it meets the required amount of fault current it operates quickly disconnecting the line
C curve - leaves the fault current on the line longer, this would allow the arc to operate longer, burning off a balloon or small treebranch. It also leaves power going for long enough to blow fuses down at fuse taps.

You can put faster OCRs behind electronic devices, which can save expensive smart grid components from damage. The slower curve OCRs are useful when in conjunction with fuses.

These devices have been around for a long time and help prevent flashovers when lightning or other transient strikes a line. They work by basically having high voltage 'jump' over the horn gap and go to ground instead of putting the full force through sensitive devices. They didn't work very well compared to modern lightning arresters but they are still used in some places as they are low cost.

Flashovers:
Insulators may not be able to take the high voltages of spikes and arcs will form between the wire and the towers. Horn gaps used to be a rudimentary protection for transformers as seen in the photo from the 1910s below. 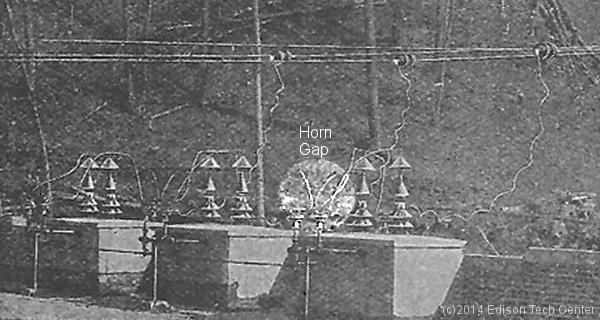 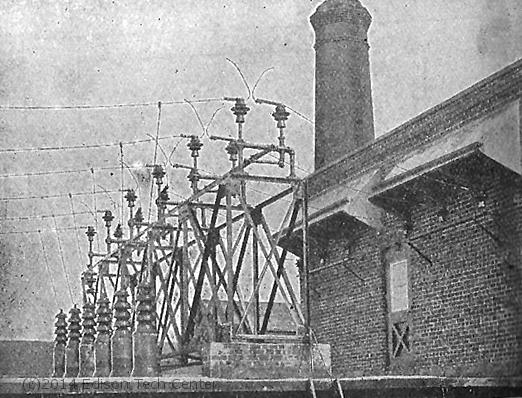 Above: Photos of the Schaghticoke-Schenectady power line from the 1890s-1910s. 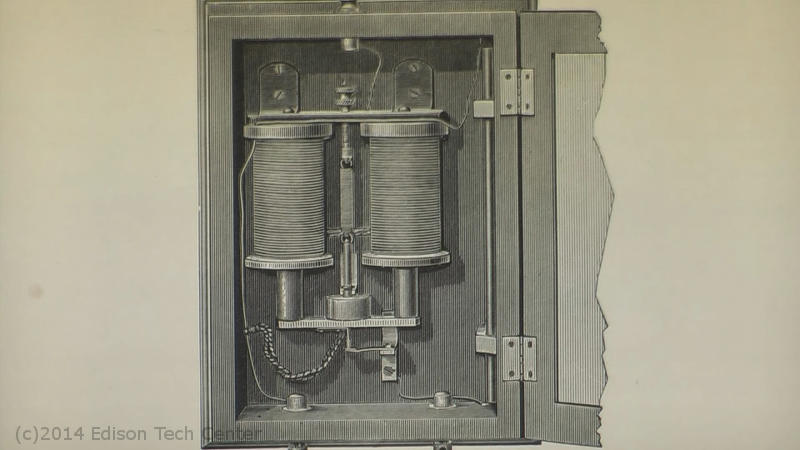 Above: Elihu Thomson's company formed the bulk of General Electric in 1892, however this magnetic lightning arrester above helped differentiate his system from competitors during the intense electric lighting system wars of the 1880s. This uses a magnetic control to open the circuit when a voltage spike is detected. This protected the DC generation system (dynamo and other apparatus) from damage.


Today engineers model for lightning strikes using sophisticated software, however at one time companies had the need to simulate lightning at laboratories. Pittsfield Massachusetts was the primary testing area for transients in power systems for almost 100 years. They had two 'lightning' machines which could produce millions of volts. General Electric would test utility systems using miniature models of a system. Many of these testing facilities at the High Voltage Lab had elaborate scale models.