Types of insulators and history

What is resistance and conductivity?

Three major categories of materials include conductors, semiconductors and insulators. Insulators have a high resistance, we can also describe them as having "low electrical conduction". Conductivity: Most metals are conductive, which means that electrons can freely flow to different atoms in a given direction. Metals have loosely bound, or free electrons which allow this to happen. Insulative materials on the other hand have tightly bound valence electrons. Understanding conductivity at an atomic level requires some basic understanding of chemistry.
More on electrical current flow (wiki) >

Insulators come in solid, liquid and gas forms. See the more detailed list in the next section for examples.


Clay (ceramic)(porcelain) - This is the standard material for high voltage and RF insulators.
Plastics - PVC, Cresyl Pthalate, DEHP and other plastics replaced rubber as an insulator for wires and other parts. PVC and nylon are now standard in most types of wire.
Glass (silica, soda ash and limestone) - This material worked fine for telegraph and other low voltage apparatus. It is still used today to some degree.
Paper/Cardboard - paper and cardboard are used as insulators in certain circumstances as these materials are cheap and can work in situations without high heat or high voltages.
Mica - This is a good stable material even when exposed to the elements. It is a good thermal conductor while being an insulator. Sheet mica is easily stamped and shaped for electrical components. Mica is very important for the most common types of capacitors.
Teflon (PTFE) - (polytetrafluoroethylene) - Slippery, durable and resistant to corrosion this Dupont made material is used in cable jackets. Other forms besides PTFE include FEP and ETFE.
PFA (Perfluoroalkoxy) - This substance is resistant to chemical attack, transparent and better than PTFE when it comes to flexibility. The weakness is that the number of times it can be folded is less than PTFE. It is good for applications near the ocean as it is resistant to salt spray. The dielectric strength of PFA is up to 4 times higher than PTFE.
Rubber - Rubber in its natural and synthetic forms was used as an insulator from before the 1870s until the 1950s. Plastics (especially PVC) replaced rubber.
Wax and oil - in the 1880s Edison used trinidad asphaltum with linseed oil, beeswax and paraffin to insulate copper wires mounted inside of iron pipes. This was used for durable underground power lines. This was used at the famous Pearl Street Station in NYC.

Insulation must be designed by an engineer for a given purpose. Making it thicker, changing its shape and determining the best material are part of the engineer's job. Insulation can fail in a variety of ways, if voltage gets too high and exceeds the "breakdown voltage" electrons will get excited to the point where they break out of their stable orbit, current will then pass through the material and often destroy the insulator.

Many types of rubber were used for electrical wiring and apparatus. Gutta Percha - a natural latex product was used for some time but was replaced by vulcanized rubbers. The end of the rubber era was sealed when chemists developed plastics that could withstand higher heat and resist corrosion better and any rubbers. See Rick DeLair's commentary on rubber at the end of this article for more information.

Modern electric wires commonly use PVC plasticized with linear Phthalates and an over jacket of clear nylon for heat and oil resistance. Oil can dissolve plastics so it is important to have the nylon coating. Linear phthalate chords of today can stand heat up to 105 centigrade. There are many specialized types of wire with unique insulation including Polyimide.

Insulators in the context of power transmission describe the support structures for wires and other devices. While knob and tube house wiring transitioned into flexible insulation, higher voltages found in HV power transmission remain the same in that there is no other economic way to insulate HV lines except by suspending the wires(using the surrounding air as the insulator) or burial.

Insulators in power transmission are designed to:
1. Separate the wire from the structural support
2. Stop lighting from bridging the gap, so this means insulating more than just for the amount of current in the wire
3. Stop ground shorts by resisting buildup of oils, water and dirt on the insulator (this is the reason for the ridged design)

As telegraph lines expanded around the world glass companies and bottle manufacturers added insulators into their product line. The National Insulator Association has documented this history well on their website.

High voltages created new problems for insulator design. Glass would crack apart with high temperatures and failed to withstand certain high temperatures, so the solution lay in Czech pottery. Master potters were hired to create porcelain products for the new electrical revolution of the 1880s. Simply changing to existing porcelain products was only a temporary solution, because the needs for even higher voltages came about in the 1890s. Chemists and material engineers helped design higher performance porcelain insulators with special coatings and designs. 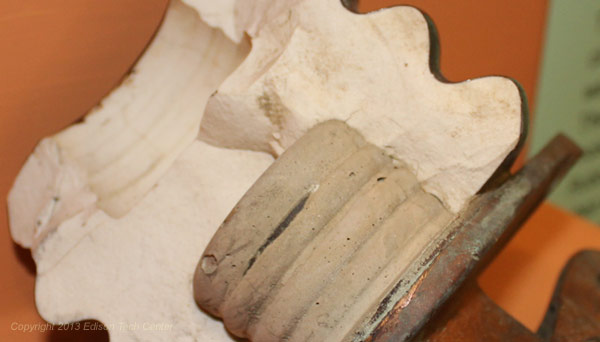 
Here is a very short timeline featuring some of the most prominent events in history:
1880 - Volta develops the battery and Davy demonstrates the carbon arc lamp, the early age of electricity begins. Wood, silk and plant products were used to wrap cables or hold wires.
1844 - Samuel F.B. Morse sends the first telegraph message. He like others before him continue to use a flat wood board beneath apparatus as an insulator to hold wires.
1840s-1870s - This was the age of the telegraph, and glass became the primary insulator type at the time.
1883 - It was common for electricians to use old gas light fixtures to hold electrical lines which went to light bulbs. Without proper insulation sparks could be seen during thunder storms. Running wires at that time was quite unprofessional in today's perspective!
1891 - Oerlikon Company makes insulators for the Lauffen to Frankfurt line. This is the first truly long distance demonstration of 3 phase AC power.

1893 - Westinghouse: For the famous Niagara Falls to Buffalo transmission line porcelain insulators rated at 11,000 volts were used temporarily until insulator technology was developed that could handle 22,000 volts
1930s - PVC insulation was developed and came into mainstream use after the 1940s
1950s - Natural rubber compounds were used in electrical wiring up until the 1950s

5.a) List of Prominent Manufacturers and Innovators of Insulators:

If you like the subject of insulators you may be interested in joining the National Insulator Association. This group collects and discusses communication and electric utility insulators.

This article by MW and Rick DeLair. Photos by Whelan Communications.