The accomplishments and life of electrical engineer and entrepreneur Thomas Edison, 1847-1931

Thomas Edison is arguably the most famous of all engineers in history. He is the most famous electrical engineer in history although during his time the electrical field had no "EE" official designation and complex mathematics and science were not fully integrated into the field of invention.

1.) The controversy of the "Shakespeare" of his field

Electric Cars, talking dolls, concrete pre-fab housing and a working lightbulb - Edison worked on all of this and more, but it would impossible to talk about Edison these days without mention of many issues featured in countless online publications and blogs about his negative side. Edison was persistent, ruthless, egotistical and sometimes inhuman. While you won't find many people who admire his personality you cannot deny his genius and work habits which focused on pumping out useful inventions, and his undying love for technology.

Whether you look up to Thomas Edison or don't like him (and people like him... such as Steve Jobs). We ask that you please avoid the idiotic simplification of history into the Tesla vs. Edison myth. Edison fulfilled his critical role in commercializing electric power, Elihu Thomson, William Stanley and Nikola Tesla (who I consider equally as important) did their roles. History is more rich and interesting than a rivalry of personalities concocted and amplified by journalists trying to appeal to the lowest common denominator of the public.

Telegraph Years: Edison began his career in the era of the telegraph. The telegraph was the most widespread use of electrical technology in the world at the time. He became a telegrapher in Port Huron, Michigan at age 16. In 1869 young innovator Edison patented an electric vote recorder, but its unconventionality led to commercial failure, forcing Edison to focus on marketability as he innovated. Knowing the telegraph's extensive use led the newly entrepreneurial Edison to develop a telegraph to receive two messages while simultaneously sending two - a "quadruplex" capacity. 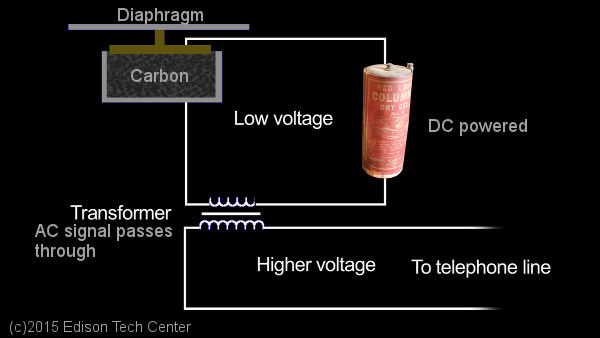 Above: schematic of Edison's carbon microphone with transformer

Western Union purchased Edison's technology, financially enabling him to relocate from Newark, NJ to nearby Menlo Park. He created a premiere industrial research lab in 1876. In In 1878 Edison founded the Edison Electric Lighting Company in lower Manhattan to produce his new incandescent filament bulbs. Edison worked on many technologies besides the lightbulb. He revolutionized the telephone industry by invention of the carbon button microphone in 1979.

Learn more about this period:
Edison and the Incandescent Lamp
Carbon Button Microphone

In 1886 Edison relocated the Edison Machine Works to Schenectady, NY - reminiscent of his rural birthplace involved in shipping grain by canal, he saw the Erie Canal as advantageous in receiving materials and shipping products. Three years later, Edison merged Edison Machine Works with Edison Electric Light Company, Bergmann & Company and the Edison Lamp Company to form Edison General Electric Company in Schenectady. Edison General Electric then merged with Thomson -Houston Company to form General Electric Company in 1892. Edison's difficult personality and reluctance to deal with AC power led the board of the General Electric to reduce his influence in the company. He remained a figurehead with little power after he sold his 10% stake in the company. By the 1890s a new crop of innovators like Steinmetz, William Stanley, Dr. Lois Bell, and Thomson took the reigns as leaders of AC power innovations at GE. Edison was left to pursue his passions and projects freely without the control of GE's board. 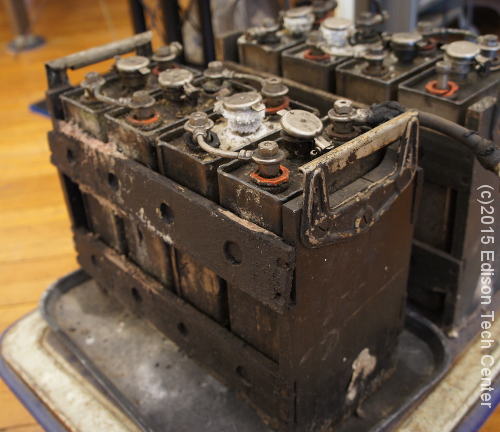 Thomas Edison had a long time interest in batteries of all sizes. When electric vehicles came to commercial use in the 1890s it renewed Edison's interest in batteries. Edison looked to improve the battery by first improving durability. Batteries made of fragile materials like clays and glass, with liquid electrolyte solutions did not work well for cars. He developed alkaline and rechargeable batteries. In the Edison-Lalande cell he replaced powdered copper oxide with briquettes and his batteries would last for an entire year. Edison's NiFe (iron-nickel) batteries were designed for electric cars and ended up in many other uses including railroad signal backup and countless other uses which require a long lasting storage and recharge ability. Even though Edison's NiFe battery helped make electric cars more practical the internal combustion engine had taken over. Thomas Edison (and members of General Electric's board) had personals relationship with Henry Ford and were in no position to go into competition to push electric cars. Edison's batteries became an industry standard for many other uses and some specimens can still be made to work even today.

Learn more about this period:
More on Edison's Batteries


Thomas A. Edison was born in Milan, Ohio, February 11, 1847. In 1854 the family moved to Port Huron, Michigan, where seven-year old Tom Edison set up his first chemical laboratory in the cellar of their large house.

When he was 12 he got his first job as train-boy on the Grand Trunk Railroad. It was on this run between Detroit and Port Huron that he acquired exclusive newsdealer's rights selling candy and papers on the train.

Edison's career as a telegraph operator began when he saved the station agent's young son from the path of a moving freight car. Out of gratitude the father taught Edison the new science of telegraphy. By the time he was seventeen, Edison was "on the road" as a telegraph operator. He drifted from Stratford, Canada, to Adrian, Michigan, Fort Wayne, Indianapolis and Boston.

When he was 21 years old Edison went to New York, almost penniless. By fixing a broken-down machine in the Gold and Stock Telegraph Company, he landed a $300 a month job as superintendent of the company. At the same time he was making many inventions, among them the "Universal" stock ticker. For this and other inventions he received $40.000 and with this money he opened a manufacturing shop in Newark, making stock tickers.

At the age of 29 he went to Menlo Park to make perhaps the greatest invention of all - a successful incandescent electric lamp. Out of the Edison laboratory in the important years between 1876 to 1886 came the carbon telephone transmitter, the phonograph, the Edison dynamo and the Edison incandescent lamp. When the electrical system with which he hoped to light whole cities required a new piece of machinery or a new device, Edison developed it. And if after developing it he could find no manufacturer, he would set up his own plants for manufacturing the equipment he had invented. By the very force of necessity the wizard of Menlo Park became a manufacturer of New York City. On September 4, 1882, Edison started operating the Pearl Street Station, the first central generating station to light New York City.

The Edison interests were expanding and in 1886 Edison sent his agents to look for suitable sites for a new factory. On the outskirts of Schenectady stood two unfinished factory buildings, which were to have been the McQueen Locomotive Works. The location of these buildings impressed Edison and he negotiated to purchase the two plants which were soon turning out the dynamos needed by the Edison generating stations. Other buildings sprang up alongside the original shops and in 1892 this plant became the headquarters of the newly formed General Electric Company.

It began to be apparent early in the 1890s that electrical development was being held up because no company controlled the patents on all the necessary elements for installing an efficient and serviceable system. The conviction was taking shape that the incandescent lamp and the alternating-current transformer system belonged together. The outcome in 1892 was the formation of the General Electric Company with the consolidation of the Thomson-Houston and the Edison General Electric Companies. Edison's was one of the many distinguished names which appeared on the first Board of Directors of the new Company. At this period, however, he concerned himself less and less with manufacturing activities and soon devoted his entire time to his laboratory in West Orange to perfect a modernized phonograph, a motion picture camera, and an electrical storage battery.

During World War I Edison experimented on many war problems for the US Government, among them the sound detection of guns and submarines, airplane detection, increasing power and effectiveness of torpedoes, improving submarines and mining harbors. But some of Edison's greatest contributions to America's war efforts were in developing synthetic products for goods we could no longer get from Europe.

Honors and awards were bestowed lavishly on Mr. Edison by persons, societies and countries throughout the world. His greatest honor perhaps, was the Congressional Medal of Honor, the nation's highest recognition of service.

Edison died October 18, 1931 in Llewellyn Park, New Jersey at the age of eighty-four.