Refrigeration is done by transferring heat energy from one area to another. This is what we call a 'heat engine'.


By changing the pressure in a pipe full of a refrigerant like freon (a fluorinated hydrocarbon), you can force the freon to evaporate (vaporize) or condense (come together into a liquid).  Electric motors control pumps which regulate the pressure in a given section of pipe.

When freon evaporates inside the refrigerator it extracts heat.  It carries it up to the back of the refrigerator (or to the "Monitor Top" as was the case in old refrigerators). A compressor then increases the pressure in the tubes, causing the freon to liquefy and dump its heat energy.  The freon is then pushed back up into the refrigerator from the bottom and the process repeats.


Further Study:
Video: good explanation of the concept of physics cooling
Video: Heat Engine and the 2nd Law of Thermodynamics
Video: About Compressors


Refrigerators are made with electric motors, fans, sensors, thermostats and other components. It requires many engineers with specialized expertise to design a refrigerator. The most prominent designer of the appliance is the heat transfer engineer. Heat transfer is a division of mechanical engineering. Engineers which specialize in this area work on everything from space vehicles to nuclear reactors to air conditioners. 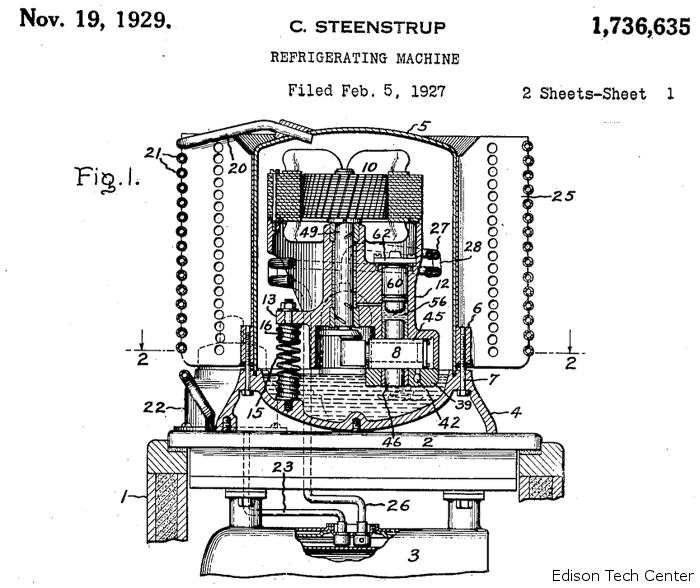 Refrigerators were once extremely expensive and consumers relied on delivery of ice to put in insulated storage for food storage.  Christian Steenstrup engineered a way to make refrigerators cheaper at General Electric by inventing the hermetically sealed refrigeration unit.


The Monitor Top refrigerator cost $300 (about $4000 in today's currency) and were the first affordable unit for upper middle class homes. Before this refrigerators cost over $1000 and were less reliable.

Above: Early consumer refrigerators were called 'monitor tops' because the top compressor unit looked similar to the turret on the USS Monitor, which was a 'hi-tech' iron-clad ship during the civil war. 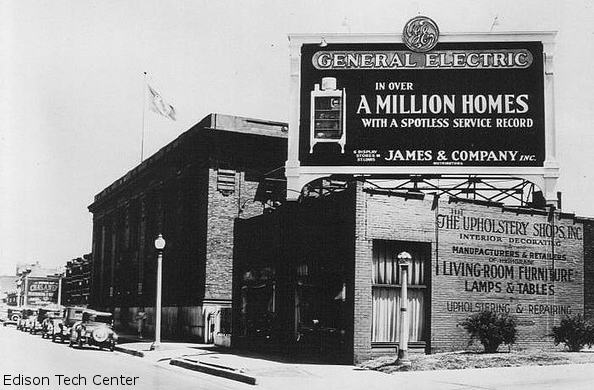 Above: cheap refrigerators revolutionized the quality of life. Before Steenstrup and GE's efforts to sell to the mass market a refrigerator cost more than an automobile.

Learn more about the father of refrigeration:
Christian Steenstrup 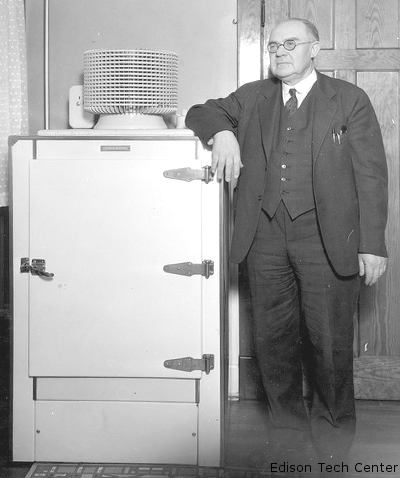