He was the first to make silicon tunnel diodes and observe phonon-assisted tunneling (1959), the first observation of inelastic tunneling and the beginning of tunneling spectroscopy. He invented (1960) closed-tube vapor phase epitaxy of III-V semiconductors, the forerunner of all present-day III-V VPE crystal growth. Besides early work (1960-62) on III-V heterojunctions, he was the first (1960) to grow GaAs1-xPx (an alloy) and to construct visible-spectrum lasers and light emitting diodes (1962), thus proving that III-V alloys are “smooth" and viable, in general, for use in optoelectronic devices. He is the inventor of the first practical LED, the red GaAs1-xPx LED, which also marks the beginning in the use of III-V alloys in semiconductor devices, including in heterojunctions and quantum well heterostructures (QWHs).

Besides demonstrating the visible-spectrum laser operation of the alloys GaAsP (1962), InGaP (1970), AlGaAsP (1970), and InGaPAs (1972), he and his student Rezek made (via LPE, 1977) the first quantum well (QW) laser diodes. Later, with Dupuis (and MOCVD AlGaAs-GaAs), he demonstrated (1978) the initial continuous 300 K operation of a QW laser, and introduced the name “quantum well laser.” He and his students introduced (1980) impurity induced intermixing (~ 600°C) of QW heterostructure (QWH) and superlattice layers, and with it the selective shift from QW lower gap to bulk-crystal higher gap (used to define waveguide and laser geometries).

In 1990 he and his students introduced the Al-based III-V native oxide into optoelectronics, including its use as a buried oxide aperture to define the current and cavity in lasers (now used in VCSELs). He is currently concerned with coupled quantum-dot/quantum well-lasers. His work has led to 500+ papers and 31 patents. 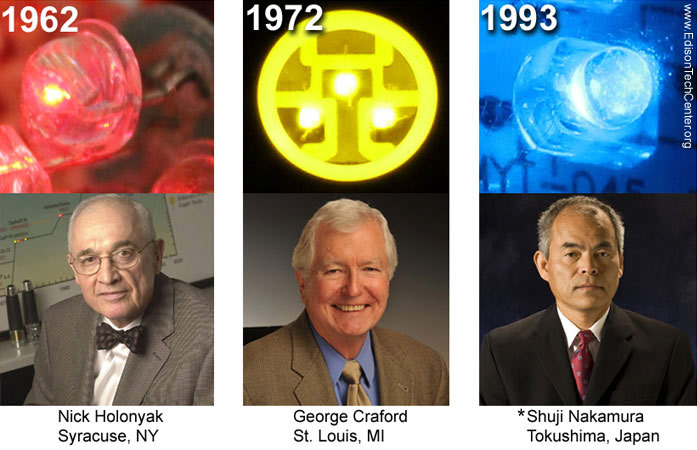