Albert Wallace Hull was born on a farm in Southington, Connecticut, on April 19, 1880. He was the second oldest of eight boys, five of whom chose technical careers: physics, bacteriology, metallurgy, forestry, and engineering. All five went to Yale, where Albert majored in Greek and took one undergraduate course in physics. He taught languages at Albany Academy for a time before deciding to return to Yale, where he earned a Ph.D. in physics in 1909. He then taught physics for five years at the Worcester Polytechnic Institute while doing research on photoelectricity. The excellence of his work became known to Irving Langmuir and William Coolidge who invited him to the GE Research Laboratory in Schenectady for the summer of 1913. After finishing a year of teaching, he returned to Schenectady, never to leave. In 1928, he became assistant director of the Laboratory. 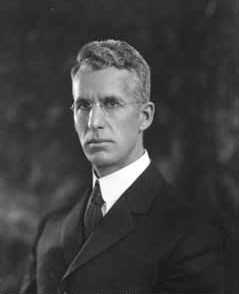 Hull was the creator of a greater number of new types of electron tubes than any other man, and made important contributions to the fundamentals of physical science as well. His first work at the laboratory was on electron tubes, X-ray crystallography, and piezoelectricity. After World War I, he published a classic paper on the effect of uniform magnetic fields on the motion of electrons between coaxial cylinders. During the 1920s, he studied noise in diodes and triodes, which led to the development of the tetrode, or screen grid tube. During this same period, he invented the thyratron, a gas-filled electron tube that found application in the control of medium powered devices and led the way to a new branch of technology, industrial electronics.

During the 1930s, he directed his research to metallurgy and glass science, which led to the development of new alloys such as Fernico. Albert Hull's industrial scientific work with GE has had tremendous scientific and practical consequences. Together with Coolidge's work on tungsten and Langmuir's work on high vacuum electronic phenomena, he was one of the pioneers who provided the foundation for the electronics businesses of General Electric. He retired from GE in 1950 but remained professionally active for many years after. His last publication, in 1966, came fifty-seven years after the first of many honors came to Hull: the Howard N. Potts Medal of the Franklin Institute, given in 1923 for work on X-ray crystal analysis; the Morris Liebmann prize of the Institute of Radio Engineers in 1930 for his work on vacuum tubes; membership in the National Academy of Sciences; and president of the American Physical Society.

During 1916, Hull began experiments on the use of magnetic control of vacuum tubes as an alternative to grid or electrostatic control as suggested to him by Dr. Ernst Alexanderson, who wanted to make a switching device. In the 1918 issue of the Proceedings of the IRE he published a paper on a vacuum tube which he had invented called the dynatron. The dynatron had three electrodes: a thermionic cathode, a perforated anode, and a supplementary anode or plate. In normal operation the plate was maintained at a lower positive potential than the perforated anode. Hull explained that secondary emission of electrons from the plate caused the dynatron to behave as a "true negative resistance." Thus the tube could be used as an amplifier or could generate oscillations over a wide range of frequencies. If a control grid were added between the cathode and the perforated anode, the device became what Hull called a "pliodynatron." In addition to grid control, he had tested successfully magnetic control by applying a magnetic field parallel to the axis of the tube.

By 1920 this research led to his invention of the magnetron, which took the form of a coaxial cylindrical anode and cathode with an axial magnetic field produced by an external coil. The Hull magnetron was tested as an amplifier in radio receivers and also as a low-frequency oscillator. By 1925, a magnetron made at the GE Research Laboratory could generate a power of 15 kW at a frequency of 20 kHz. At the time, Hull anticipated that the magnetron would find greater use as a power converter than in communication applications.

After retirement 1n 1950, Hull did consulting work and served on an advisory committee of the Army Ballistics Research Laboratories. He died on 22 January 1966 at the age of 85.

Below: Old Film with Albert Hull speaking and walking at the Research Lab at 2:50 min.


Related Pages:
Article by Edwin Reilly Jr.
If you are a historian and wish to correct facts or publish a commentary or embedded article feel free to contact us.