Below: a simple diagram of the major parts of an original 1950s era direct current power diesel electric locomotive. 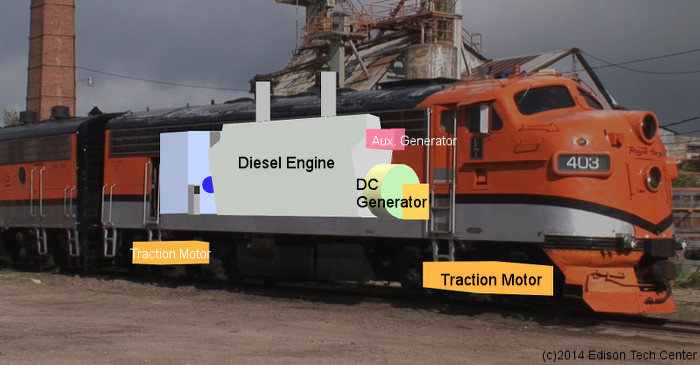 Diesel Locomotives use electricity to drive forward motion despite the name 'diesel'.  A large diesel engine turns a shaft that drives a generator which makes electricity.  This electrical energy powers large electric motors at the wheels called 'traction motors'.

DC and AC Power:
Some locomotives use DC generators and others use AC. Modern alternating current locomotives have better traction and adhesion and are used on trains that carry heavier loads. DC is still used because it is cheaper to manufacture. Learn more about AC, DC, adhesion and traction in this good article here >


See our videos below on each part of the diesel locomotive. We use the classic F1 EMD locomotive at Royal Gorge Route Railroad as an example of the basics of diesel electric locomotive technology.

PART 1: The Diesel Engine - about the 16 cylinder diesel engine and head end generator


PART 2: Electrical Generators and Apparatus - about the main DC generator, traction motors, aux. generator and other electrical parts. Learn how the diesel locomotive is powered up.

PART 3: Brakes and Connectivity - we show you the brake system and other parts


Since the 1920s diesel locomotives have been around, but it wasn't until the 1940s that large locomotives were made which could replace steam power.

Improvements: The EMD F1 you see in the video above took up a lot of space.  It takes two modules (3000 horsepower) to have enough power to pull the Royal Gorge Passenger Train.  As we moved into the 1960s locomotives were designed which could have more horsepower in a smaller module. Some engineers worked to reduce the noise and the smoke exhaust caused by burning oil. Modern locomotives can have 3000-6600 HP in just one engine.

Major manufacturers of diesel locomotives include: EMD (Electro Motive Division)(part of GM), General Electric and at one time American Locomotive Company (ALCO).   The collapse of ALCO happened as a result of business problems, General Motors and General Electric were able to secure deals with Union Pacific and other railroads using both the fact that they could act as a bank providing the loan. GM and GE could also give the railroads business hauling goods (cars (GM) and electrical products (GE)).