Learn about the history and development of the gas turbine

The gas turbine has become an important, widespread, and reliable device in the field of power generation, transportation and other applications. A gas turbine is an internal combustion engine, it can burn a variety of fuels (which contributes to it's great versatility).

There are many forms of gas turbines from 1 to 10+ meters in length. Gas turbines come in a great variety of forms to fulfill a variety of power needs from driving tanks, jets and helicopters to power generation and industrial power uses.

In this webpage we discuss gas turbines used to make electric power.

Later on you can learn about the many other complex forms of the gas turbine listed on the wiki page.

Uses of a gas turbine with shaft:

The shaft can be connected to other machinery to do various types of work such as: turning a helicopter rotor, running a compressor (which "crushes" a gas to a condensed form for use in industrial applications) or generating electric power.

The gas turbine is useful to our modern world because it is relatively compact in size and makes a lot of power. Gas turbines are used in backup power systems in Manhattan for example, when the grid goes down due to natural disaster, gas turbines power up and can produce power for emergency uses.

Harnessing the power of an explosion: How the device works: 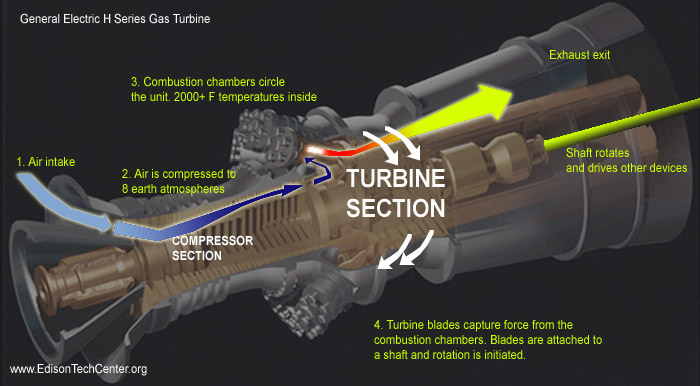 The gas turbine burns fuel in a high pressure combustion chamber, the products of this are forced into a turbine. A turbine has specially engineered blades attached to a central shaft, and as the high pressure gasses flow through, the shaft rotates. The shaft spins with incredible force. The shaft is often connected to a generator which creates electric power. Sometimes the shaft is connected to a compressor. Compressors are used to compress gas or vapor for a myriad of industrial and commercial uses.

Watch the video below to learn details on how the gas turbine works:

Gas turbines developed from two fields of technology: the steam turbine, and the internal combustion engine. Work on both of these fields helped lead to the "Modern Gas Turbine" of the post 1940's period.

1500 - 1870s: Leonardo da Vinci, Gionvanni Branca, John Barber, and others mention or design devices that use hot gas or steam to create motion. Simultaneously work by Samuel Brown, Sadi Carnot, Samuel Morel, William Barnett, and others develop the design of the internal combustion engine. Basic understanding and theory of how gases burn and behave in enclosed spaces is developed.

BCC Brown Boveri & Cie (Switzerland) conducts development of gas turbines for utility power generation starting in the 1930s. Raul pateras de Pescara , Hans von Ohain, Max Hahn develop their own designs outside of BCC Brown Boveri. In 1936 BCC Brown Boveri built a supercharged velox boiler for a refinery in Pennsylvania which was used in the catalytic cracking process for oil. In 1939 a 4 Megawatt power generation gas turbine is installed in Neuchatel, Switzerland. You can now see this turbine on display at Birr, Switzerland. It ran from 1939-2002.

The first commercially sold gas turbine in the Western Hemisphere used for electric power generation was installed in 1949 at Belle Isle Station, Oklahoma, US. A core group of engineers from General Electric pioneered an efficient and power design that formed the basis for a multi-billion dollar industry. The design led to an explosion in sales of gas turbines worldwide. Gas turbines finally had established a firm place in reliable power generation after 1950.

*Video lectures are available of Arne Loft and Bob Hendrickson 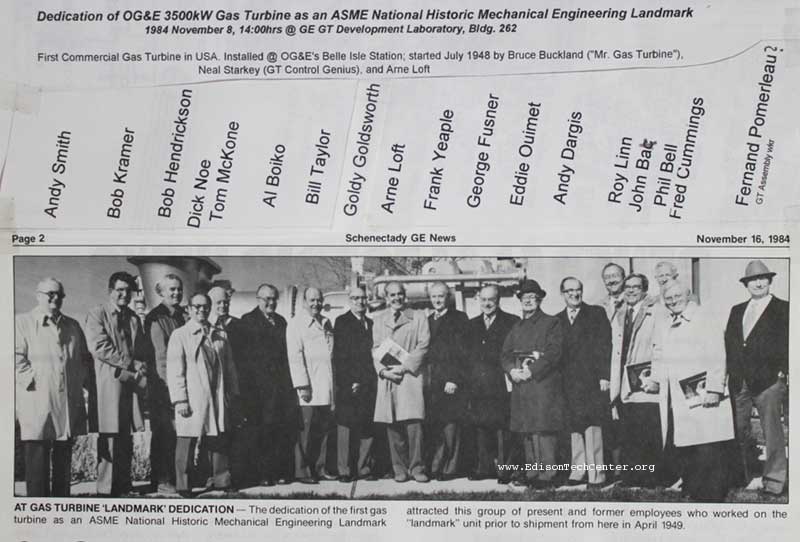 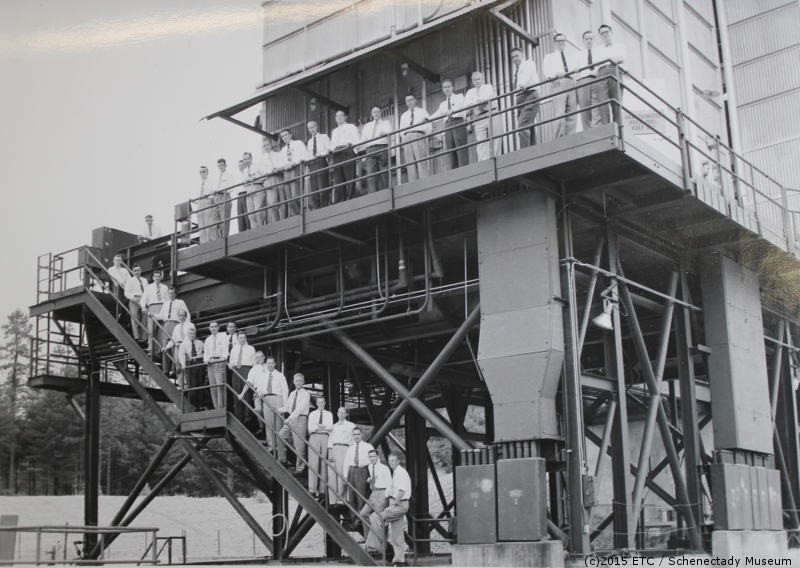 Above: Rocket and gas turbine engineers at Malta Test Site

Gas turbines are extremely sophisticated devices which require precise controls to operate. Control engineers at General Electric were the first to design a reliable control system. Neil Starkey designed a mechanical control which was reliable in the 1940s. A better system was needed using computers and electronics (which itself had just been developed at the time). This first electronic system was developed by Arne Loft, a mechanical/electrical engineer working at GE in Schenectady, New York. Below is his story of the development of the first Speedtronic Control System. (Later on Speedtronic became a large product line which controls more than just gas turbines, but steam turbines and other devices).

Video on the first Speedtronic Control System below: