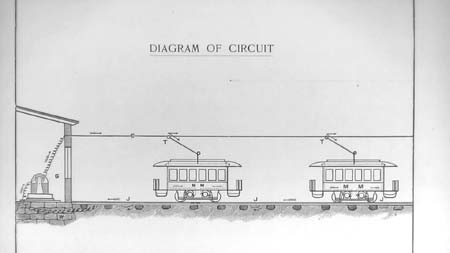 Since the world first saw Thomas Davenport's model train in the 1830s engineers have worked on electric means to transport passengers. Trolleys, streetcars or 'trams' as they are called in some parts of Europe emerged as one of the first uses of electricity along with the electric light. 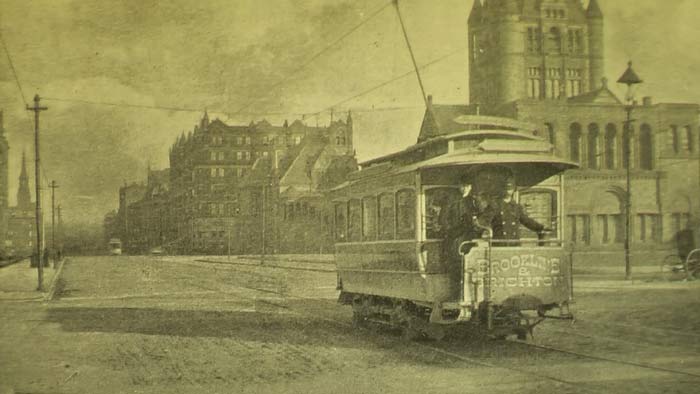 Above: early trolleys in Boston in the 1880s. These trolleys used a simple overhead catenary made of one cable. Today in most places we use more advanced catenaries and pantographs to keep better contact with the overhead cable.

The trolley - a passenger vehicle powered by overhead wires, electric rail system or by horse.

The horse-drawn trolley was the first important step in trolley technology as it demonstrated the great efficiency of steel wheels on tracks. Horse-drawn trolleys were in wide use prior to the 1880s and electricity. Electrical trolleys eliminated the problem of horse excrement and animal maintenance. 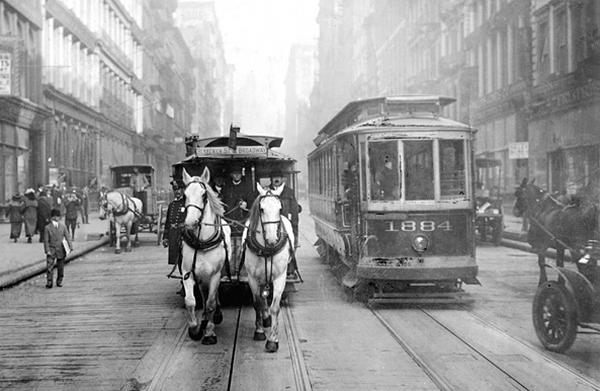 Goodbye excrement! ...at least from one of the sources. A horse drawn trolley next to an electric trolley in NYC. Notice the center third rail for supplying power. Sometimes that third groove contained a cable which dragged the trolley. San Francisco's famous trolleys are pulled today using cables driven by four 510 HP electric motors.

Most trolleys/trams use metal rails like a train on shared rights of way (on streets). Some trolleys are more of an 'electric bus' with rubber tires, and they drive under catenaries (overhead wires) supplying electricity. Most trolleys and trams operate in dense urban or suburban areas. Tracks may be embedded in the street. Not all trolleys were urban, some trolleys like the 'bullet cars' had fewer stops, went between towns, and evolved into what we now call 'light rail'.

Traction motors (DC or AC electric motors) drive the wheels of light and heavy rail. The vehicle can be operated by a person or computer. Most trolleys are supplied by overhead wires called catenaries. The group of wires has an upper strong wire in a curve (catenary) connected to a second wire below called the 'contact wire'. The contact wire provides a smooth surface to follow for long overhead poles with conductors on the vehicle. Some devices don't use a pole device, they use a spring-like assembly called a pantograph. Learn more about the technical challenge and system of overhead lines here > 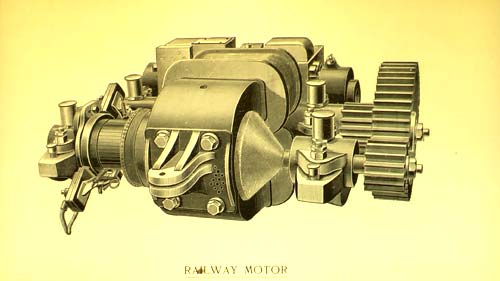 Above: traction motor designed by Elihu Thomson and others in the 1890s

Death of the Trolley Conspiracy Theory:

According to some most trolley lines in North American cities met a premature death when the oil industry and General Motors attempted to monopolize transportation in the US. According to some they used political pressure and raw buyouts to tear out trolley lines in order to create more of a dependence on bus lines and oil. Dangers of trolley-to-automobile accidents were given plenty of press to help the efforts to remove trolley lines from city streets. GM and the Rockefeller Family's influence did not reach effectively into Europe where many of the existing trolleys (trams) still exist today and are still heavily used. The other side of this argument against what some call a 'myth' is that buses proved to be cheaper to maintain and more versatile than trolleys.

Trolleys use either an overhead cable or 'third rail' to supply power to an electric motor. According to some engineers this is and always has been the most energy efficient form of transportation in human history. Having a powerful, efficient electric motor mounted in future cars, supplied by a line embedded in the road would provide a solution to mass energy consumption needs. Fossil fuels loose much of their energy through heat transfer, and carrying the weight of batteries is a problem with current electric cars. The dynamics of today's technologies may change as internal combustion engines become more efficient and heavy batteries may be replaced by nanotechnology.

Light rail evolved from trolleys as a way to transport people and smaller freight loads at higher speeds. Light rail, unlike trolleys have a dedicated right of way. Light rail has smaller motors, is less expensive to purchase and operate than 'heavy rail'.

The point in history when trolleys (slow moving and serving more dense urban areas) became 'light rail' was evident in the 1930s with the development of "Bullet Cars".  Engineer Malcolm Horton talks about using these trolleys in our video here:

Light rail development is growing today due to overloaded highway systems. In some places like the American West, China and urban Africa cities exploded with growth after the invention of the automobile. Cities lacked planning of multiple transportation options.  Light rail is much cheaper than subways and is a solution for cities with lower density where it is easier to make the right-of-way on the surface.