This is one of the most powerful inventions of the 20th century and it was made possible by electrical engineers.

"Television was not the invention of one person" "It was the conception of many minds. Many branches of science were involved in the invention." - Ernst Alexanderson, developer of TV broadcast 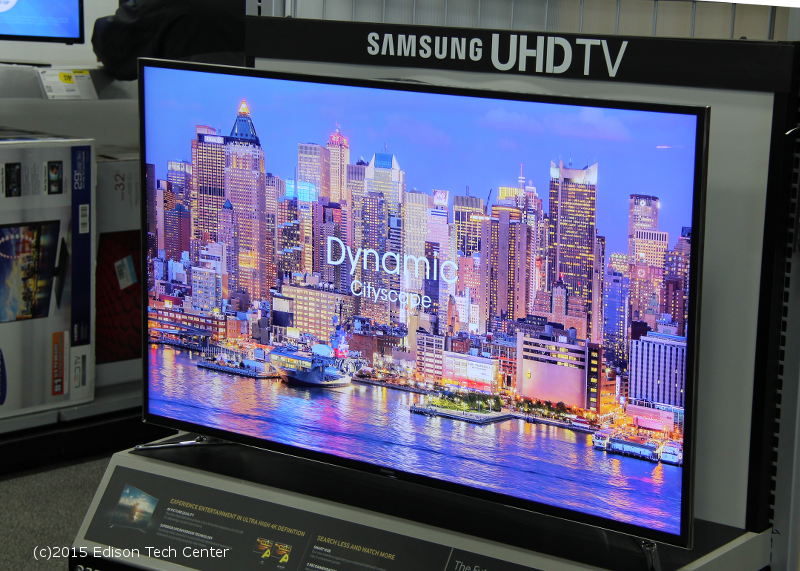 One Technology, Many Parts


'Television' is not just the screen, but hundreds of different devices needed to make an image happen. It took thousands of engineers several decades to perfect color television broadcast.

The 'stream' of innovations needed for early TV:

Televisions from the 1920s to the 2000s were predominantly cathode ray tubes. CRTs still have their advantages today in that they are reliable, very long lasting (one can't say the same for flat screen technology) and they are more energy efficient than LCD, LED, projection or plasma TVs.

A positive or negative charge on plates (a set of horizontal and vertical) inside the tube can 'deflect' the motion of the electron beam. By increasing positive charge on the upper plate moves the beam up. See the link to the video below to get a good understanding one step at a time.

Learn about how cathode ray tubes work (US army film) this is a good thorough description (15:40 min) >

Cold-cathode tubes go back to 1897 however it wasn't until John B. Johnson and Harry Weinhart worked on a hot cathode tube that we saw the first extremely crude video display for sale in 1922.

It's one thing to make a video display with an electron tube and phosphors, it's an entirely different kind of challenge to send images over radio waves and display them on the other side. Swedish Engineer Ernst Alexanderson had proved his importance at the GE Research Lab in Schenectady, NY during the development of long distance wireless audio transmission. In the 1920s he took on the task of trying to transmit video over wireless. He brought together the best minds and worked off of other rudimentary ideas by contemporaries. Using all of the science and talented minds of the time(including his own) he was able to make TV work.

Alexanderson was both manager and researcher, so his opinion was highly regarded by GE management. In 1924 he wrote an internal memorandum "Television in Radio" in which he predicted his advancements in short wave would lead to TV transmission using 1 MHz bandwidth. He envisioned that TV would be used to show current events in theaters in 1924. Later on that would change to the more impactful technology of TV in the home.

The rotary disk became a focus for Alex as he was already skilled in the area having designed his early transmitters using alternators. He worked on the foundations established by Paul Nipkow in the 1880s. By 1926 John L. Biard developed a spinning disk TV in England. Alex analyzed the work of Biard, Hoxie and Jenkins. Alexanderson visited Europe in 1925 and gained further information on photoelectric cells and August Karolus's (Germany) mechanical TV system.

Alexanderson came back from Europe and asked Albert W. Hull for help with getting photoelectric cells to work properly. Hull's work on photoelectric cells allowed for the 'eye' of television. A camera had to electronically 'see' the subject. Prior to this film exposure was the only useful way to capture an image. Meanwhile Alex's assistant and team began to solve the problem of controlling the oscillograph beam.

One image at a time:

1926 was the year Alexanderson was able to solve the problem of how to send still photos over radio. He send a facsimile from Schenectady to New York City. He continued to focus on the grand goal of image transmission over the Atlantic. His papers and presentations also focused on the problem of trying to transmit over 100,000 'brushstrokes' through radio rapidly to make a photo instantaneously. During a talk in front of the IRE in New York City in January of 1927 Alex predicted that every home would have a TV set within 10 years. Alexanderson knew that mechanical TV was not efficient and saw the solution "if a ray of light could be made to scan without the use of mechanical motion".

Alex developed a mechanical TV in 1927. It used a highly sensitive neon light developed by important lighting pioneer Daniel McFarlan Moore. The light would get signal from a radio amplifier and could change in intensity at 1 one millionth of a second.

By October 1927 Alexanderson announced that he had successfully sent the first TV images from the GE Plant to his home at 1132 Adams Rd. in Schenectady (see photo above). His device produced 24 lines of resolution. His next task was to transmit voice over radio to accompany the image. Alexanderson went on to make the first public demonstration of his television at Proctors Theater using a projection TV (January 13, 1928). 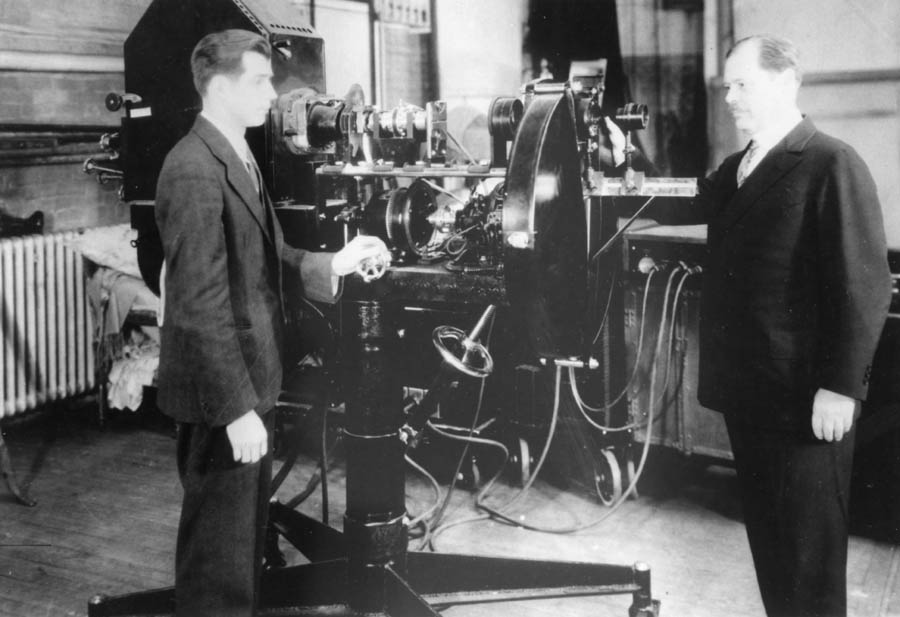 Alexanderson's TV projector at Proctors Theater in Schenectady in 1928. He predicted that TV would first be used in theaters for a brief period of time before home TV sets. 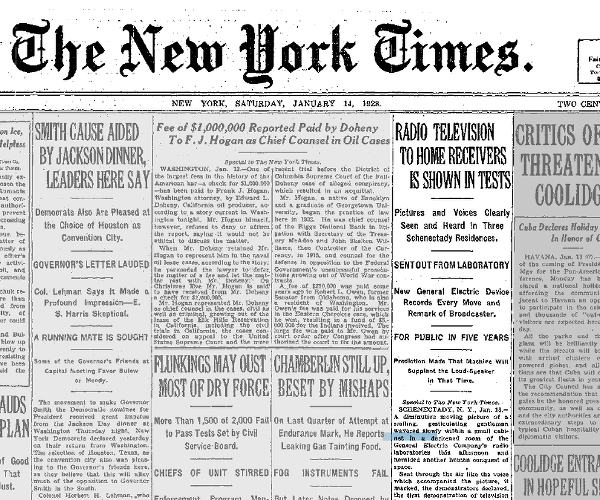 "Radio Television To Home Recievers is Shown in Tests: Picture and Voices Clearly Seen and Heard in Three Schenectady Residences"
"For Public in Five Years"
"...the first absolute proof of the possibility of connecint homes throught the world by sight as they already been connected by voice."
"some engineers predict [televisions] may be in most of the homes that now possess loud-speakers."

"Home television was developed by Dr. E.F.W. Alexanderson, consulting engineer of the Radio Corporation of America and the General Electric Company and his assistants. For seven or eight years he had worked on the principle of television but the home sets are the development of comparatively recent months."

Go to our biography page on Alexanderson >


Alexanderson provided several TVs to homes in Schenectady and began regular broadcasts on April 22, 1928. Pictures were broadcast on 37.8 meters and the voice on WGY radio. The news of the success of the experimental TV exploded across the country. Alexanderson was overwhelmed by people wanting to take part in further experiments.

Alexanderson wrote a letter to Swope (president of GE) asking for cooperation between engineers at Westinghouse (Pittsburgh), GE (Schenectady) and RCA (New Jersey). He stated that the personal face to face interactions was key to advancing the field of television. RCA was composed of a efforts from all three companies and Alex argued on the position of efficiency in further development. He saw the facsimile development as important as TV.

Alexanderson had a facility built in California and facsimiles were being sent at 8 square inches per minute by 1929.

Alexanderson visited George Eastman's lab in 1928 and already began thinking of ways to make color television. He went on to make many patents including a color TV receiver for RCA in 1955.

Vladamir Zworykin worked for Westinghouse on Television technology throughout the 1920s. He had many patents on the technology before 1931 however he never actually built a working demonstration of the technology as Alexanderson had done. With a better cathode ray tube in 1929 Zworykin was finally able to create a patent for a "kinescope". One month later he was hired by David Sarnoff at RCA.

1930s:
The year 1930 started a full effort to develop a transmission system at RCA. RCA bought rights from Hungarian engineer Kalman Tihanyi who developed a system where a beam could strike photoelectric cells (inside of a tube). The revolution in this design was that electric charges would be stored constantly between two scansions by the cathode ray beam. More >

Zworykin worked with Tihanyi's principals and came up with the 'Iconoscope', which was a camera tube. Germany was the first to broadcast live television in 1936 (Berlin Olympic Games). About two hundred public theaters received the broadcast.

Dr. Elmer Engstrom (RCA) defined the resolution and optical specifications for television while at the RCA labs in Princeton, New Jersey(1941). He used test groups to determine resolution, brightness, flicker rate and image size. Engstrom had over 120 engineers and scientists to help him get through the initial work on TV.

RCA dominated the beginning market of TV however there was competition from GE, Zenith, Philco, Sylvania, Hazeltine and DuMont. Philco's strengths were in production of consumer goods. RCA dominated on all fronts.

Important engineers to the early days of television include: