Pioneer of the Laser

Gordon Gould was born in New York City in 1920. Inspired by Thomas Edison, his ambition from childhood was to be an inventor. After his undergraduate years at Union College in Schenectady, where he majored in physics with an emphasis on optics, he went on to Yale University for graduate work in spectroscopy and received an M.S. in physics in 1943. Toward the end of World War II, he worked at the Manhattan Project on the separation of uranium isotopes. After the war, he continued graduate studies in physics at Columbia University. His studies in optical and microwave spectroscopy inspired his original concept of laser technology, an idea which he said came in a flash one night in 1957. He wrote in his notebook "Some rough calculations on the feasibility of a LASER: Light Amplification by Stimulated Emission of Radiation," the first use of this acronym for the now familiar name. But he did not file for a patent until two years later, after others had applied for patents on similar devices, and thus lost the strongest possible case for priority. The first of Gould's basic laser patents was not issued until 1977, a full 20 years later. 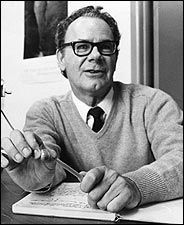 The concept of stimulated emission was formulated by Albert Einstein in 1917. In 1954, before anyone claimed invention of a laser, Charles H. Townes and Arthur L. Schawlow invented the maser (microwave amplification by stimulated emission of radiation), using ammonia gas and microwave radiation. The technology is very close but does not use visible light. Some historions credit Theodore Maiman with invention of the first laser, but Gordon Gould patented the optically-pumped and discharge-excited laser amplifiers now used in most industrial, commercial, and medical applications of lasers. These devices are used in 80 percent of the industrial, commercial, and medical applications of lasers. Gould also holds patents on several other applications of laser technology and on applications of fiber optic communications. He was inducted into the National Inventors Hall of Fame in 1991. Gordon Gould died in Manhattan, where he was born, on September 16, 2005.