Pioneer of electromagnetism, motors, generators and telegraph,
The accomplishments and life of Joseph Henry, Jr. (1797-1878)

Joseph Henry and Michael Faraday are the founding fathers of the electrical industry and electrical technology. Electric motors, generators, transformers, radio and the telegraph all function on electromagnetic principles discovered by these men who worked on opposite sides of the Atlantic. Henry not only pioneered electrical technology almost 50 years before Thomas Edison, but led the Smithsonian, National Academy of Science and occupied important positions such as President Lincoln's science advisor. The world of physics and electronics now uses the scientific unit "Henry" (H) to measure inductance. Henry is the founding father of the National Weather Service and led study of the atmosphere. 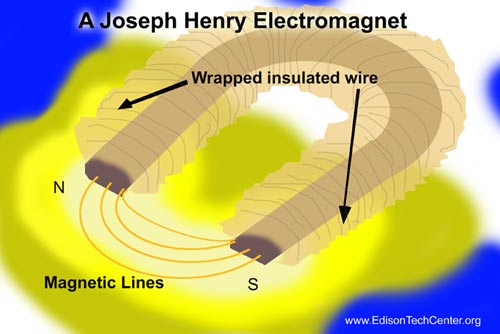 Contents
1.) Timeline of the Electromagnet, Henry's most famous innovation
2.) Biography of Joseph Henry
--2.a) Early Years
--2.b) The Birth of the Electrical Industry
--2.c) Henry's Electric Motor
--2.d) Henry and the Telegraph
--2.e) Later years as a national leader and Further Study
3.) Related Technologies - learn about the transformer and other modern devices that are based on Henry's work


1.) Invention of the Electromagnet, Timeline of Major Points:

1770s - Alessandro Volta (Italy) experiments with chemistry to make electric sparks.
1800 - Volta develops the first 'battery' based on Luigi Galvani's work and his own study. Volta's battery sets the stage for innovators like Henry and Davy later on. Using a relatively stable battery to supply current creates a flurry of discoveries.
1800 to 1809 - Sir Humphry Davy makes the first electric light by inventing the arc lamp and incandescent light, although neither are usable as products > Electric light becomes the first innovation of electricity, before the other major innovation of the electric motor later on.
1820 - Hans Christian Orsted discovered that electric currents create magnetic fields
1824 - William Sturgeon was the first to take an varnished iron core and wrap it with bare copper wire. When he energized it became magnetized for a moment, then lost magnetism when the current escaped into the iron core. He could not do a multi-layered wrap, which did not allow the magnet to be very strong.
1827 - Joseph Henry discovers that it is necessary to use isolated wires (copper wrapped in silk) to make the wrap around the iron core, this is very important and allows the magnet to hold a magnetic field. The electromagnet has remained basically the same ever since.
1820s - Henry builds many electromagnets of different sizes.

1830 - Joseph Henry moves from Albany Academy to Princeton, NJ. Princeton funds a trip to England where Henry meets his contemporary Michael Faraday. Faraday's work is based on moving a copper wire relative to a stationary magnet, Henry's work is based on using electricity to create a powerful electromagnet, which induces current in a second electromagnet, and electricity is than created on the other side (this is the basis of a transformer).

Below: See our short video where Dr. Frank Wicks talks about the contributions of both Henry and Faraday and the meeting of the two in England in 1830. (1:40 min) below about it:

1831 - (Ironville, New York) Joseph Henry creates the first commercial electric product ever by working with Allen Penfield. They create an ore separator. Henry created a powerful electromagnet that could lift 750 pounds (340 kilos). That magnet would magnetize iron spikes that were fitted in a spinning drum. Those spikes combed through powdered iron ore, the purest of iron stuck to the spikes and was brushed off into another bin. This was the first commercial electrical product in history. When Vermont blacksmith Thomas Davenport visited this machine he was inspired and developed the first powerful electric motor in history just three years later.

1831 - Henry creates motion from electricity (his first 'motors'). Henry creates the oscillating beam motor and in another experiment is able to send power over 1 mile of wire to cause a striker to hit a bell at the Albany Academy.

Below: our embedded video on the first magnetic ore separator, the first electrical product, or click link

Amusing fact: Henry used the term "projectile power" of a battery to describe the voltage of a battery. He used this term because he wanted more power to be 'pushed' through longer wires. He wrapped longer and longer wires around his electromagnets and quickly ran into the problem of the weakness of batteries at the time.

Henry was the first to tightly coil insulated wire around a ferrous core to make an extremely powerful electromagnet, improving on William Sturgeon’s electromagnet, which used loosely coiled uninsulated wire. Using this technique, he built the most powerful electromagnet at the time for Yale University ("The Yale Magnet"). He also showed that, when making an electromagnet using just two electrodes attached to a battery, it is best to wind several coils of wire in parallel, but, when using a set up with multiple batteries, there should be only one single, long coil used. The latter made the telegraph feasible.

Joseph Henry took what he had learned a step further and in 1831, created one of the first machines to use electromagnetism for motion. This was the one of the earliest ancestors of the modern DC motor. It didn’t make use of rotating motion, but was merely an electromagnet perched on a pole, rocking back and forth. The rocking motion was caused by on of the two leads on both ends of the magnet rocker touching one of the two battery cells, causing a polarity change, and rocking the opposite direction until the other two leads hit the other battery. Henry's work on motors allowed Thomas Davenport to invent the first real electric motor in 1834. Davenport used his motor to operated a small model car and train. This helped lead to street cars developed by Frank Sprague and the Electric Car. 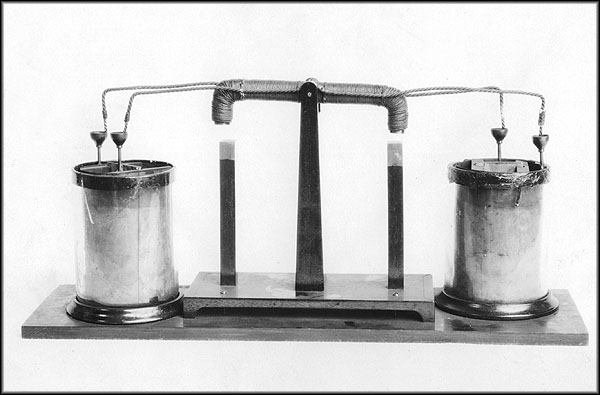 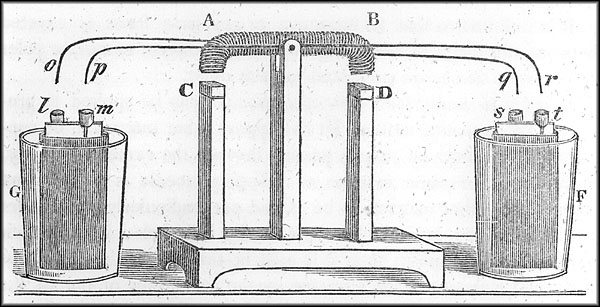 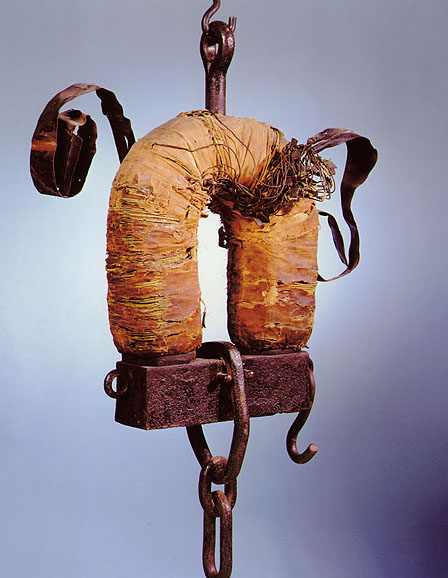 The Yale Magnet, photo by the Smithsonian.

In July 1832 Henry publishes results in the Silliman's American Journal of Science on his work with "self-induction". He had conducted experiments with his electromagnets and sparks measured the results using a galvanometer. Henry creates an important foundation in physics knowledge and creates a first understanding of the principle that drives transformers and generators.

Learn about the concept of induction on our page here

2.e) Henry secures his future as a leader

By the 1840s Henry had secured himself as an important figure in the United States engineering/scientific community. He was voted to be the first secretary of the Smithsonian on December 3, 1846. Henry restructured the young organization and crafted goals and organizational/financial structure for the Smithsonian. He continued to work with the Smithsonian for the next 32 years.

In 1849 he formally launched his program to study atmospheric and weather patterns in North America. Henry's program involved over 600 volunteers from the Caribbean to Canada. His work led to the creation of the National Weather Service later in 1870. Henry's innovations in the telegraph actually are what helped make weather data efficient to gather in real time.

Henry led many scientific societies and encouraged young people to pursue the sciences. He became the second president of the National Academy of Sciences (NAS). Henry pushed for international cooperation in science and engineering. He worked hard in efforts to have the Smithsonian share information with other European institutions.

During the American Civil War (1861-1865) Henry became Lincoln's science advisor. He worked in developing ways to conserve resources for the war effort. The Smithsonian became involved with the Surgeon-General in improving health conditions and collected data for researchers.

Books on Henry:
Joseph Henry: The Rise of an American Scientist (Smithsonian Studies in the History of Film and Television). by Albert E. Moyer. 1997.
Electrical Pioneers of America, Their Own Words. Edited by Stephen P. Tubbs, M.Sc.P.E. 2003.

See the section of the Smithsonian website devoted to Henry >