Washing machines are the result of mechanical and electrical engineers and over 150 years of developments.

The impetus for small volume home washing machine development happened in the US where there was a rising middle class. In Europe and other regions the existence of a more rigid class system ensured low cost hand washing services done by peasants and there was less pressure to improve the system.

Since the 1700s England, Germany and the US contributed the most mechanical non-electric innovations to clothes washing machines. Jacob C. Schaffer, John Turnbull, and Magaret Colvin were some of the innovators in the field


The wringer consisted of two wood cylinders used to squeeze the water out controlled by a hand crank. The wringer wouldn't totally dry the clothes, it would just change it from 'soaking, dripping wet' to damp. In the age of electricity the wringer became controlled by a motor. The wringer required labor to feed through each article of clothing, it also was notorious for crushing fingers. The job of the wringer was replaced by a process of spinning the drum of clothes at high speed in a perforated metal container. This idea of using centrifugal force to dry clothes was developed long before electricity but electricity made this easier to do. 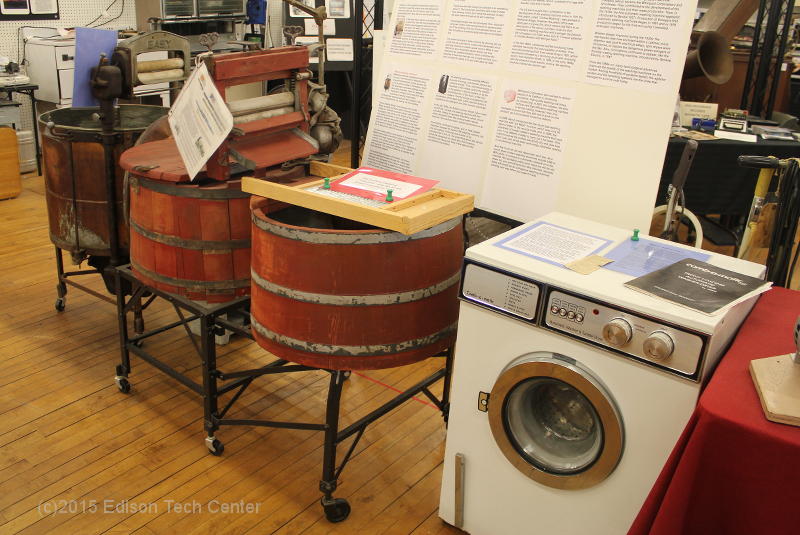 Various models on display at the Edison Tech Center

There are three types of home washers: Front-loaders, top-loaders with verticle axis, and top-loading machines with horizontal axis. Each one functions differently but they have some similar parts. It becomes easier to understand how they work and how to fix them if you isolate the appliance into separate parts. Click on the links to learn more about each part.


Electrical parts of a washing machine:

Electric Motors - AC induction motors are typically used with washing machines, they not only spin the drum full of clothes, but run water pumps.
Power Supply - this is a transformer which converts power from the grid to specific voltages needed to run the motors and computer. Sometimes the AC motors can take power directly from the wall (120/220V), but the computer always requires lower voltages.
Computer - the computer or brain of the appliance keeps track of timing and actions required for each different cycle. Designing the computer is the realm of both software engineers and control engineers. Typically the motors are supplied with power from the grid and a simple on/off switch is controlled by the computer. In more sophisticated appliances we may use a variable speed motor and the computer then ramps the voltage up or down depending on the speed needed. When the computer (usually one or more circuit boards) in a washer goes bad it is normally the most expensive component to replace as this board consists of proprietary software an it is easy for companies to inflate the price as they control supply.
Input switches - In top loading washers these are simple rotary switches and buttons, these are low cost to produce and easy for users of all education levels and ages to operate. Front loading machines (traditionally used by professional cleaners) have many more options and can have complex interfaces with many buttons and menu items.
Pumps and valves (solenoids) - one or more pumps are used in washing machines to introduce fresh water or pump out soap water. In more simple designs fresh water has no pump, a valve controlled by the computer releases water at standard pressure into the wash bin until a sensor detects that the proper amount of water has been released. An electrically controlled valve called a solenoid uses electromagnetic energy to open the valve when current is supplied. Calrods - a calrod may be used in some washers to heat up water used in washing

Modern washing machines work using cycles, each cycle can be broken down into a series of commands for the electrical components.

Washing - The first cycle involves mixing water with soap and agitating the clothes. In a top loading machine the agitator is found in the middle of the bin and moves in the opposite direction as the main bin. Both move back and forth ensuring that soapy water gets to all parts of the cloth and the movement of cloth against itself or against the ridges on the plastic agitator helps scrub. In front loading machines calrods or gas heaters can heat water before it enters the washing bin, this helps wash clothes better, but also consumes more electricity.

Rinsing - Soapy water is pumped out and fresh water is released into the bin to remove the soap.

Spin cycle - we spin clothes to squeeze out most of the water, in the past the wringer would do this job.

Drying - clothes may be hung or we use a dryer. The advantage of hanging clothes outside when it is sunny is that the UV rays help sanitize the clothes. UV light damages the DNA of microoganisms and prevents them from replicating. Heat used in dryers also can sanitize. Learn more about dryers here.