The electric motor was first developed in the 1830s, 30 years after the first battery. Interestingly the motor was developed before the first dynamo or generator.
Motor leads to the generator:
After weak electric motors were developed by Faraday and Henry, another early pioneer named Hippolyte Pixii figured out that by running the motor backwards he could create pulses of electricity. By the 1860s powerful generators were being developed. The electrical industry could not begin until generators were developed because batteries were not an economical way to power society's needs. Read about generators and dynamos here >

2.a) Parts of an electric motor:

There are many kinds of electric motors but in general they have some similar parts. Each motor has a stator, which may be a permanent magnet (as shown in the 'universal motor' above) or wound insulted wires (an electromagnet like in the photo above-right). The rotor sits the middle (most of the time), and is subject to the magnetic field created by the stator. The rotor rotates as its poles are attracted and repelled by the poles in the stator. Watch our video below showing how it works. This video covers a brushless DC motor where the rotor is on the outside, in other motors the same principle is in reverse, with the electromagnets on the outside. Video (1 minute):

Strength of a motor:
The strength of the motor (torque) is determined by voltage and the length of the wire in an electromagnet in the stator, the longer the wire (which means more coils in the stator) the stronger the magnetic field. This means more power to turn the rotor. See our video which applies to both generators and motors to learn more.

Armature - the rotating part of the motor - this used to be called a rotor, it supports the rotating copper coils. In the photo below you do not see the coils because they are tightly tucked into the armature. A smooth housing protects the coils from damage. 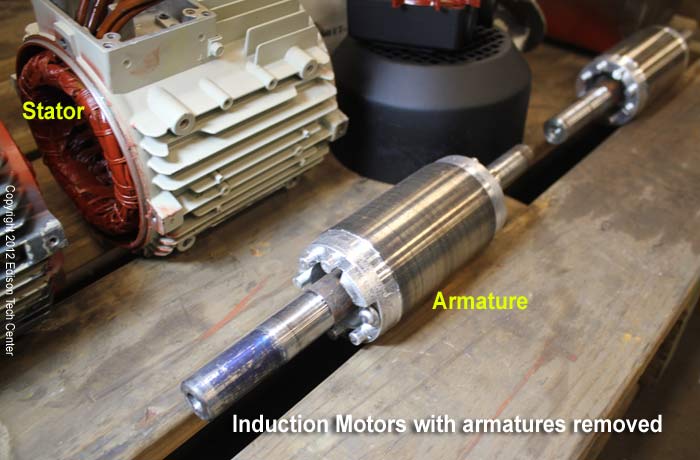 Stator - The housing and coils that make up the exterior of the motor. The stator creates a stationary magnetic field. 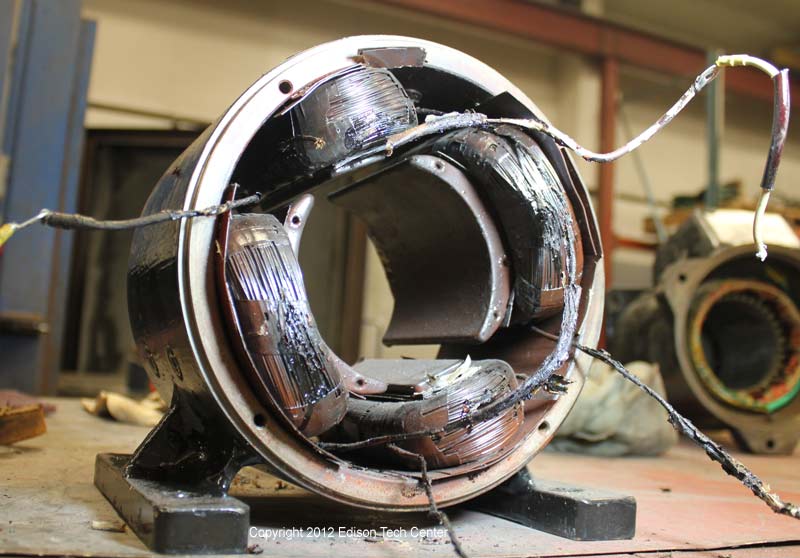 Above: four distinct coils are clearly seen in this stator (the armature was removed)

Winding or "Coil"- copper wires wound around a core to used to create or receive electromagnetic energy.

Wire used in the windings MUST be insulated. In some photos you will see what looks like bare copper wire windings, it is not, it is simply a enameled with a clear coating.

Copper is the most common material for windings. Aluminum is also used but must be thicker to carry the same electrical load safely. Copper windings allow for a smaller sized motor. More on Copper >

Burning out a motor, troubleshooting:
If a motor is run for too long or at excessive load, it may "burn up". This means that that the high temperature caused the winding insulation to break down or melt, the windings then short when they touch and the motor is damaged. You can also burn up a motor by putting more voltage into it than the winding wires are rated for. In that case the wire will melt at the weakest point, severing the connection. You can test a motor to see if it has burned out this way by testing for Ohms (resistance) on a multi-meter. In general you want to look for black marks in the windings when you check a motor.

Squirrel Cage - the second coil in an induction motor, see below to see how it works
Induction - the generation of electromotive force in a closed circuit by a varying magnetic flux through the circuit. In AC power the power level is going up and down, this charges the winding for a moment creating a magnetic field. When the power drops in the cycle the magnetic field cannot be sustained and it collapses. This action transfers power through magnetics into the other winding or coil. LEARN MORE about induction here. 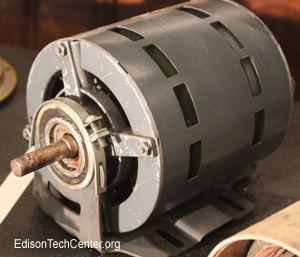 See our page dedicated to the Induction Motor here > 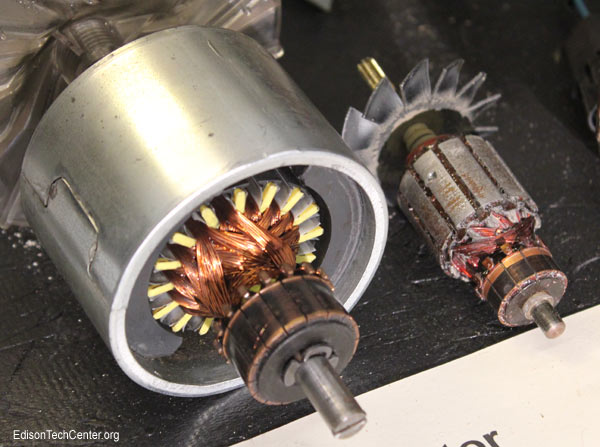 This is a powerful motor which can be used with both AC and DC power.

Advantages:
-High starting torque, and small size (good for there common use in consumer power tools)
-Can run at high speeds (great for washing machines and electric drills)

Disadvantages:
-Brushes will wear out over time 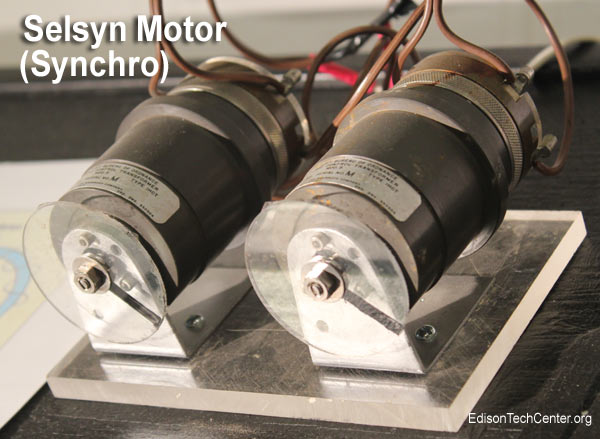 This motor is similar to in induction motor except that it moves with line frequency.

The Selsyn Motor was developed in 1925 and is now known as the Synchro. Learn more about them here.

Advantages: It provides a steady speed which is determined by the number of poles and the supplied AC power frequency.
Disadvantages: Cannot handle varying torque, this motor will stop or "pull out" at a given torque.
Uses: a clock uses synchronous motors to provide an accurate rotation speed for the hands. This is an analogue motor and while speed is accurate, the stepper motor would be better for working with computers since it functions on rigid "steps" of a turn.

Disadvantages: slow to start, low torque to start. Used in fans, notice the slow start of fans.
This motor is also used in washing machine drains, can openers, and other household appliances.
Other kinds of motors work better for more powerful needs above 125 watts. 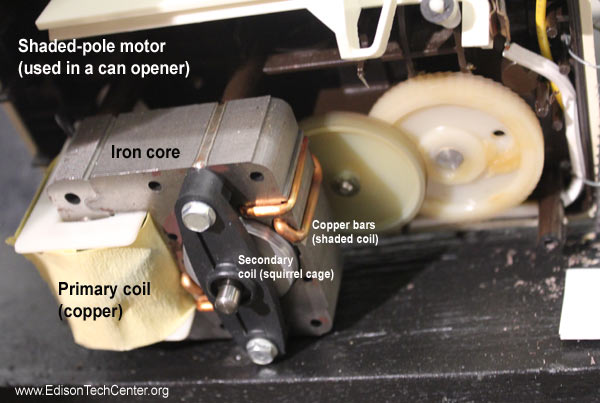 Direct current motors were the first kind of electric motor. They are typically 75-80% efficient. They work well at variable speeds and have great torque.

The first DC motors used brushes to transfer current to the other side of the motor. The brush is named so because it first resembled a broom-like shape. The little metal fibers rubbed against a rotating part of the motor to keep constant contact. The problem with brushes is that they wear out over time due to the mechanics. The brushes would create sparks due to friction. The parks often melted insulation and caused shorts in the armature and even melted the commutator.

The first motors were used on street railways.

Uses a split ring commutator with brushes.
Advantages:
-Used in a myriad of applications, has easy speed control using level of voltage to control.
-Has a high starting torque (a powerful start)
Limitations: brushes create friction and sparks, this can overheat the device and melt/burn the brushes, therefore the maximum rotation speed is limited. The sparks also cause radio freq. interference. (RFI)

The brush is replaced by an external electric switch which is synchronized to the position of the motor (it will reverse polarity as needed to keep the motor shaft spinning in one direction)
-More efficient than brush motors
-Used when speed control must be precise (such as in disk drives, tape machines, electric cars etc.)
-Long life since runs at a cooler temperature and there are no brushes to wear out. 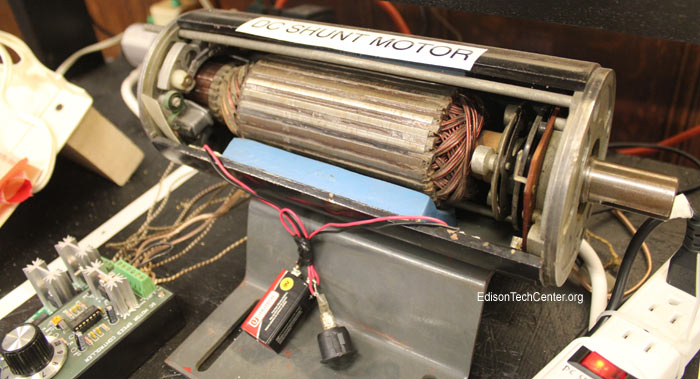 The armature (seen above, it is the long fat cylindrical rotating part) has thick copper wires, this is so that lots of current can pass through it to get the motor started.

As the armature turns (see photo below) the current is limited by counterelectromotive force. 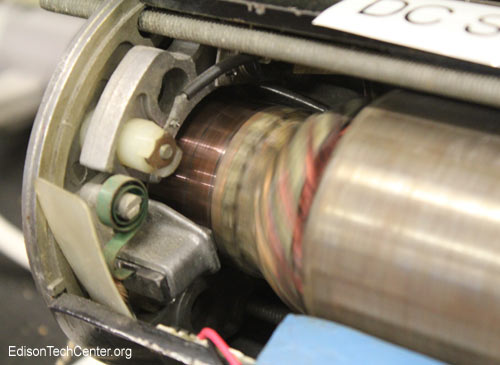 The strength of the shunt field coil determines the speed and torque of the motor.

Advantages: The DC Shunt Motor regulates its own speed. This means that if load is added the armature slows, CEMF decreases, which results in the armature current increasing. This results in an increase in torque which helps move the heavy load. When the load is removed the armature speeds up, the CEMF increases which limits the current and torque decreases.

See the video below of a DC shunt motor in action!:

This kind of motor looks similar to a DC shunt-wound motor except that the field windings are made of a heavier wire so it can stand the higher currents.

Uses: This type of motor is used in industry as a starting motor due to great torque. 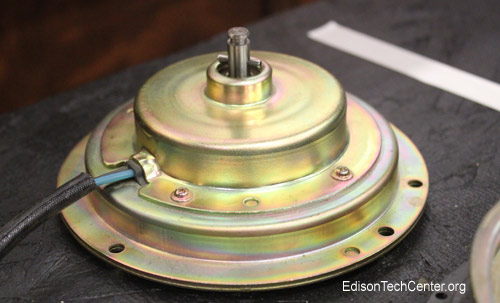 The pancake motor is a ironless motor. Most motors have a copper winding around an iron core.

Advantages:
Exact speed control, flat profile, does not have cogging which is caused by iron in an electromagnet

Disadvantages:
flat shape is not good for all applications

Has a winding shaped in a flat epoxy disc between two high-flux magnets. It is totally ironless, making great efficiency. Used in servo applications, was first designed as a windshield wiper motors and the video industry since it was very flat in profile and had good speed control. Computers and video/audio recording all used magnetic tape, precise and fast speed control was needed so the pancake motor was developed for this. Today it is used in a myriad of other applications including robotics and servo systems. 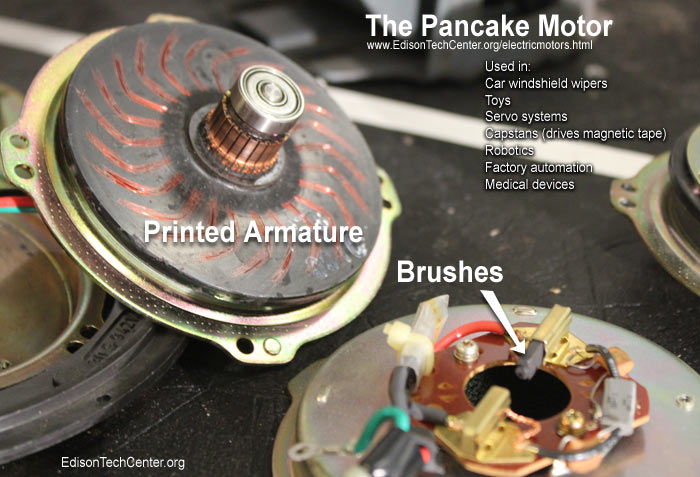 This is another self excited motor with both series and shunt field coils. It has an efficient speed regulation and decent starting torque.

This kind of motor operates well at high speed and can be very compact.
Uses: compressors, other industrial applications

The SepEx has a field winding which is separately powered from the armature with a direct current signal. The field magnet also has its own DC supply. As a result you'll see this type of motor has four wires - 2 for the field and 2 for the armature.

This motor is a brushed dc motor which has broader torque curves than a series wound DC motor. 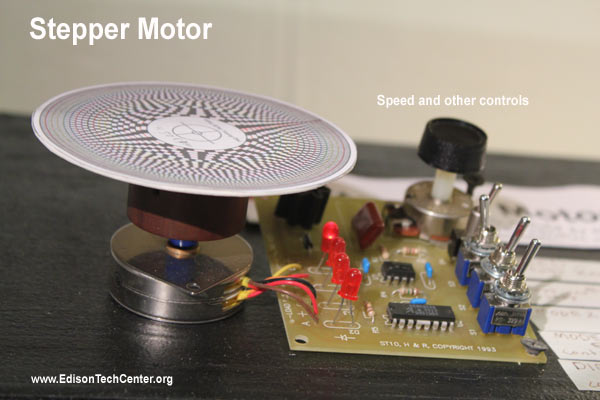 The stepper motor is a type of brushless motor that moves the central shaft one part of a turn at a time. This is done using toothed electromagnets around a centralized gear shaped piece of iron. There are many kinds of stepper motors. They are used in systems that move objects to a precise position, like a scanner, disc drive, and industrial laser carving devices.

See the video of the Stepper Motor in action below:

The wound copper or aluminum core rotates around a magnet without the use of iron. This is done by making a cylinder shape.
Advantage: light and fast to start spinning (used in computer hard drives)
Disadvantage: easily overheats since iron normally acts as a heat sink, it needs a fan to keep cool.