Wires as we define here are used for transmission of electricity or electrical signals.  Wires come in many forms and are made from many materials. They may seem simple but engineers are aware of two important points:

-Electricity in long wires used in transmission behaves very differently than in short wires used in design of devices
-The use of wires in AC circuits brings on all sorts of problems like skin effect and proximity effects.

1.) Behavior of electricity in wires: Resistance and Impedance


It's important to know if you are dealing with DC or AC power in a given wire. AC power has some very complex physics which cause some strange effects. This was one of the reasons why AC power was developed in the 1890s, long after DC power. Engineers like C.P. Steinmetz had to figure out the mathematics and physics first.

AC Power:
In AC power current likes to travel near the surface of a wire (skin effect).  AC power in a wire also causes a magnetic field to form around it (inductance). This field effects other nearby wires (such as in a winding) causing proximity effect. All of these properties must be dealt with when designing an AC circuit.

DC Power:
In DC power current travels through the whole of a wire.

Size of the conductor and material (AC and DC power):

Electricity travels more easily in highly conductive elements like copper, silver or gold, the less conductive the material, the larger the diameter has to be to carry the same current load.

Engineers choose the right wire diameter for the job, raising current in a wire increases the resistivity and generates more heat. As you'll see in the diagram below copper can carry more current than aluminum while carrying the same load.

Below: When Sir Humphrey Davy put lots of current through a thin platinum wire in 1802 it glowed and made the first incandescent light! but just a few seconds later the wire melted and vaporized due to the heat caused by resistance in the wire.


Quality of Material: Impurities and Crystals:

Most materials have impurities.  In copper the oxygen content and other materials in the copper effect the conductivity, so copper which will be made into an electrical wire is alloyed differently than copper which on it's way to becoming plumbing.

Metals are crystalline (as you'll see in our Copper video). Monocrystalline copper or aluminum has better conductivity than polycrystalline metals, however large crystal copper is very expensive to produce and only used in high performance applications.

Resistance in a wire the describes the excitation of electrons in the wire's conductor material. This excitation results in the creation of heat, and loss of efficiency. In early DC power Thomas Edison couldn't send his power a long distance without using wide-diameter copper wires due to resistance over distance. This made DC power not cost effective and allowed for the growth of AC power.

Measurement Tools:
Engineers use Ohms Law to calculate how much resistance a given wire will have. This tells us how much energy we will loose over distance.

Formulas for Resistance and Conductance:

When Resistance is Good:
Creation of heat in a wire is normally a sign of wasted energy, however in a tungsten or tantalum wire the heat makes the wire glow and produce light which may be desired. Tungsten is used to make filaments because it has a very high melting point. The wire can get very hot and glow brightly without melting. Tungsten would be very bad for power transmission since most of the energy put through is lost in the form of heat and light.


In power transmission we look for the lowest resistivity possible, we want to transmit power over long distances without losing energy through heat.  We measure resistance in a wire by ohms per 1000 feet or meters.  The longer electricity has to travel, the more energy it looses.

Above: Carl Rosner , Mark Benz and others used special superconducting wire coils to produce the world's first 10 Tesla magnet. Niobium and tin are used instead of copper since materials work differently at different temperatures.

One great solution to power transmission is superconductors.  As a metal becomes super cold (approaching absolute zero) it obtains a conductivity of infinity.  At a certain point there is no resistivity at all. There have been experimental superconductive high voltage lines which were able to transmit power with almost no losses, however the technology is not developed enough to be cost effective.

Every wire used to transmit AC power creates a magnetic field while current flows through it.  The magnetic field is visualized by concentric rings around the cross section of the wire, each ring closer to the wire has a stronger magnetic power. Magnetic fields are useful for making very strong magnets (when in a coil) i.e. making motors and generators, however these magnetic fields are unwanted in power transmission lines.


In AC power electrons like to flow on the outside of a wire. This is because the changing of current back and forth causes eddy currents that result in current crowding toward the surface. 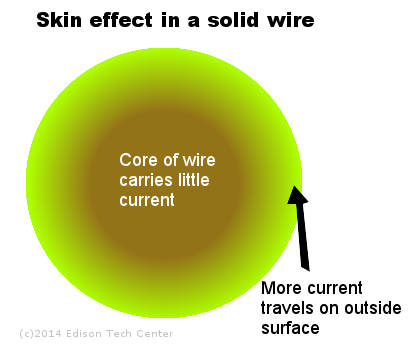 Skin depth is a fixed number for given frequency, resistivity and permittivity. The higher the frequency of AC power in system, the more current is compressed on the outside of the wire, so a wire that is used at 60 Hz at a given voltage will not be ok at 200 MHz.  Engineers must always have the skin effect in mind when designing circuits. See the wikipedia site for the formula used to calculate the skin depth.


Below: Higher frequency AC = less skin depth. The 'faster' current alternates back and forth the more eddy currents it creates. This high frequency power supply operates in the MHz range, notice the special wire used on the right.  The wire appears to be stranded and bare, but it is not, it has a clear enamel coating insulating it, so each small strand of wire carries it's own part of the current, with current traveling on the outside of each strand. This gives more surface area as a whole and allows for a large amount of current to travel through. 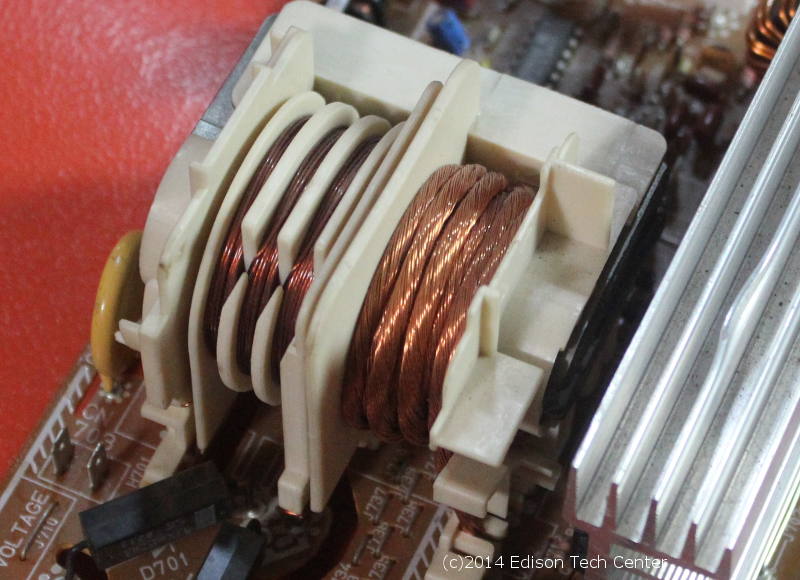 
Below: Video on types of wire used by electric utilities:

The most common material for electrical wire is copper and aluminum, these are not the best conductors however they are abundant and low cost. Gold is also used in applications because it is corrosion resistant.  Gold is used in automobile airbag electronics to guarantee that the device will function many years later despite exposure to harmful elements.

Gold is usually used in contact areas because this point in the system is more exposed to corrosion and has more potential for oxidization.

Aluminum wrapped around a steel center wire is used in power transmission because the aluminum is cheaper than copper and doesn't corrode. The steel center is used simply for strength, to hold the wire over long spans. Above is a typical ACSR cable used in overhead powerlines around the world.

Good conductors which are a solid at room temperature: