Long distance transmission of electrical power is one of the major challenges of the electrical age.  The goals which engineers have been working towards have remained the same despite many other things changing over the years.

1. Efficiency - transport electric power over distance with minimal losses
2. Safety - transport power through urban and rural areas minimizing harm to people and animals.
3. Cost - use the minimal raw materials and building/operating costs possible
4. Robustness - create a system which is not vulnerable to surges from lightning, solar flares, earthquakes, ice storms, wind storms and have the system be able to 'heal' itself when outages occur, isolating problem areas.

Below: a simple illustration of the power grid, showing High Voltage stepped down to feeder lines 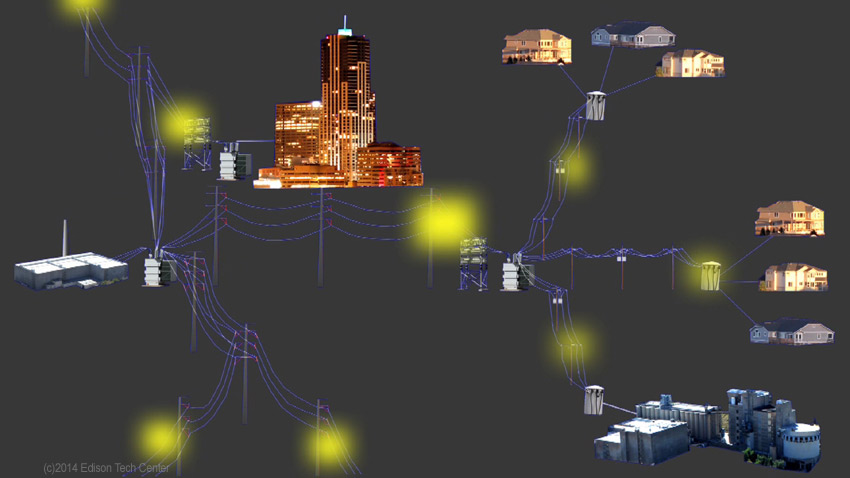 Since the first long distance power transmission to Munich Germany in 1882 humans have made every mistake possible and learned from it. Engineers are still trying to solve very difficult problems like cost control and resistance to solar flare events which could knock out power worldwide.


The are four ways to transport electrical power over long distances:


Alternating Current proved to be the most effective for distance transmission because of several great properties:

1. AC power can be easily converted from low to high voltages and back again. Higher voltages are best for 'pushing' power thought a conductor because higher voltages lose less energy along the trip than lower voltages (efficiency is key!).

2. AC Power is good for power grids as it distributes itself throughout a grid and can 'heal' by routing power around an outage area.

Below: a simple and linear model of an AC distribution system. The power is stepped up to 345kV, brought down to 69kV and eventually ends up at a house at 220 volts. Transformers change the voltage while capacitors and inductors keep the wave form in sync. Effects of inductance and the changing loads can put the AC waveform out of sync, which ends up in loss of efficient transmission.

Above: Alternating current substations may look complex from a distance, but most are designed with common components.


This can be more efficient than AC and the technology for solid state HVDC systems is relatively new.  HVDC was the first form of long distance transmission in 1882. These lines are not in a 'grid' configuration which can evenly distribute power in a net, but HVDC systems consist a single long distance line connecting major grids with 'valves' at each end.  HVDC grids cross China, the US and Europe, connecting major geographic areas.  HVDC is especially useful to connect islands like Great Britain and Japan as it can go under water. 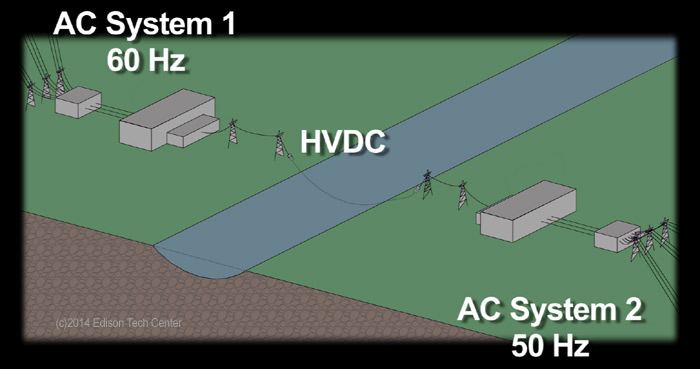 Above: HVDC makes it easier to cross bodies of water. Denmark and the UK depend on HVDC connections to the mainland to keep their systems part of the larger grid.

Advantages of HVDC over HVAC Power are:

1. Peak Voltage: AC lines are designed for peak voltage, in DC power you can carry twice the power at steady DC voltages which would be the same as only your 'peak' AC voltage. So in other words you fit more power on the same cable.
2. Radiation and Capacitive Loss: AC power radiates and there is some capacitive coupling to the ground and in between the 3 conductors. This reduces efficiency. HVDC doesn't have this problem.
3. Skin Effect: AC high voltage often uses clusters of wires or cables because of this phenomena, however HVDC can have just one large cable which can be cheaper.


If we use superconductive conductors in super cold temperatures we can deliver power through underground cables with almost no loss at all.  Unfortunately this technology is not yet cost effective.  Short experimental lines have been put in at Albany, NY and other locations in Japan and Germany.


It is possible to send power wirelessly through the air.  Nikola Tesla and the General Electric Research Lab experimented with this, however it is impractical for a number of reasons.  It is extremely inefficient going through the medium of air, and it is deadly for animals like birds passing through the high powered beams.  It is unlikely this technology will ever be useful, especially since we are leaping ahead with HVDC, achieving impressive levels of efficiency.


Engineers have been working special labs to test resistance to lighting, shorts, EMP bombardment.  Many engineers the Edison Tech Center has interviewed over the years have found testing to be quite a satisfying career.

The first step in understanding power transmission is the behavior of wires and electromagnetism.

Before working with electricity and tinkering with electrical products we urge you to be aware of the deadly and surprising forces at work. See our video below showing the effects of high voltage electric arcs on the human body:

Learn about the 'transmission' parts of the power grid: