Major accomplishments: Inventor of the direct current electric motor in North America* which used a brush and commutator, built the first electric train, visualized the use of electric motors as a replacement for steam engines.

Thomas Davenport was born in Williamstown, Vermont, USA. He became an apprentice to a blacksmith at age 14. Later on he set up his own blacksmith shop in Brandon, Vermont. There was a local iron industry in Brandon and Davenport married the daughter of a local merchant. He loved books and acquired all the books he could find on electricity and magnetism.

An electric motor is a device that uses electricity to create mechanical force. Joseph Henry had created some simple devices that made motion from his electromagnets, however the devices were inefficient and viewed as more of a spectacle. Davenport, built his device off the foundation created by Henry. Davenport bought Henry's electromagnet system from Penfield Iron Works and began his own studies on electromagnetism in 1833. He built an apparatus that used four electromagnets. He mounted two electromagnets to a pivot, and two others on fixed poles. He than used a battery attached a a commutator (a switching device) to supply current to the system. When he threw the switch the device rotated and thus created the "first" electric motor.

"Davenport mounted one magnet on a wheel; the other magnet was fixed to a stationary frame. The interaction between the two magnets caused the rotor to turn half a revolution. He learned that by reversing the wires to one of the magnets he could get the rotor to complete another half-turn. Davenport then devised what we now call a brush and commutator. Fixed wires from the frame supplied current to a segmented conductor that supplied current to the rotor-mounted electromagnet. This provided an automatic reversal of the polarity of the rotor-mounted magnet twice per rotation, resulting in continuous rotation." - Dr. Frank Wicks, ASME

Davenport's invention attracted the attention of media. The New York Herald wrote "The occult and mysterious principle of magnetism is being displayed in all of its magnificence and energy as Mr. Davenport runs his wheel."

Other inventors at the same time:

Davenport was among a hand full of people in the world working on using electromagnets to create motion. Others created devices of movement which were viewed as curiosities by spectators. Davenport stood out with his design by his use of a commutator, and the motor's integration in the first electric train.

England: William Sturgeon created his own electric motor in 1832. His design used commutator and rotating magnets. Sturgeon when on to invent the galvanometer and remained active in electrical societies in England for the rest of his life.

France: Hippolyte Pixii was a French inventor who much like Davenport did not have a formal background in theory. Pixii was also working with electromagnets. In 1832 he invented the first AC generator by using a hand cranked magnet. He did not use a commutator at first. 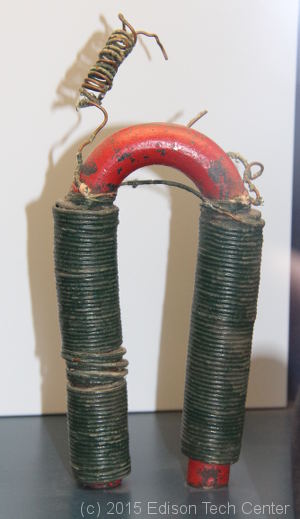 Above: one of Joseph Henry's magnets, something which inspired Davenport
Learn more about the Smalley-Davenport Shop in Brandon (Forestdale) > 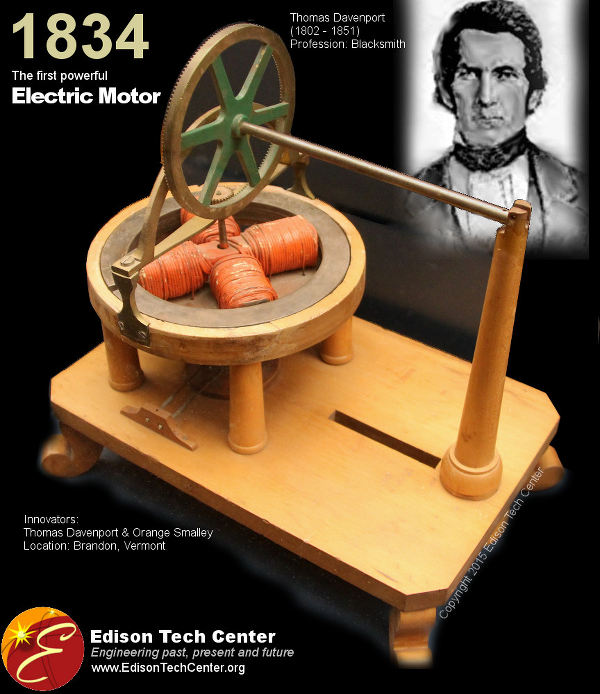 Davenport moved to New York City and set up a workshop close to Wall Street. He made Ransom Cook his business partner. Cook maintained control of Davenport's shop in New York while Davenport himself traveled frequently back to his workshop in Vermont. He built many new versions of his motor. He was even able to build an electric-powered piano. Davenport worked on ways to try to use the motor for weaving silk, grain harvest, lathe and milling lumber, bark milling, sugar grinding, plowing, and printing. In 1840 Thomas Davenport built a more powerful motor to run a printing press. He used his press to publish a work entitled The Electro-Magnet and Mechanics Intelligencer. Unfortunately he was not able to make the motor profitable. The quality of batteries available at the time was poor and they provided inconsistent power. The cost of batteries also made his invention hard to sell. The steam engine proved to be more practical for industrial uses. Davenport's motor was used later on by innovators like Edison to develop more advanced inventions. When ran backwards Davenport's motor generated power, and was one of the earliest DC dynamos.

In 1849 the US Senate committed a large sum of money to build an electromagnetically propelled train from Washington D.C. to Baltimore. The effort was run by Charles Grafton Page. Page himself had experimented with electricity and magnetism since the 1830's and proceeded to design the train. Davenport remarked why should they spend so much when he had already created the motor necessary. The experiment run by Page failed. The 21K pound train full of passengers did reach 19 miles per hour, but the insulation on the windings burned through and batteries were damaged. The locomotive had to return to Washington in a damaged state.

He visualized the future as being full of large electric motors working for man. He returned home to Vermont broke and decided to write a book about the role of the electric motor in the future. He never finished his book. Unfortunately Davenport died young and broke. His impact by his inventions, and his visions for the future make him a significant part of the history of electricity.